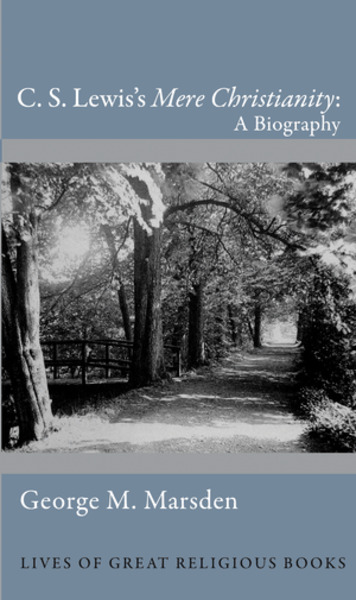 “Lives of Great Religious Books” is a series that treats religious classics to biographical analysis, from their conception to their assessment and appropriation by generations of readers. The series has treated Christian classics such as Augustine’s Confessions and Calvin’s Institutes, and it is fitting that Marsden, the great chronicler of twentieth-century church history, takes on the challenge of this title.

Mere Christianity did not start out as a book, and it became one rather improbably. Marsden devotes the first three chapters to the decade before the book, with Lewis’s BBC radio addresses during World War II. The darkness of that war provided inspiration to Lewis for his talks, as he understood his calling as a “translator”—expressing Christianity in the vernacular. These talks were gathered into three short books, The Case for Christianity, Christian Behaviour, and Beyond Personality, which were published collectively as Mere Christianity in 1952.

For many American readers, Lewis provided space between modernism and fundamentalism. In this way Lewis fit perfectly into the American “new evangelical” turn of the 1950s (even as he avoided platforms to expand his voice, when, for example, he declined the opportunity to serve as a contributing editor for the newly-launched Christianity Today in 1956).

InterVarsity Christian Fellowship prominently promoted him on many college campuses. Through the labors of Clyde Kilby, Wheaton College became the headquarters of growing evangelical interest in the smoking, drinking, pro-theistic-evolution non-inerrantist. Reformed readers were mixed. Westminster Seminary’s Paul Woolley described Lewis’s Case for Christianity as “a brilliant statement,” but two years later, his colleague Cornelius Van Til found flaws in the argument that rendered it “destructive of the evangelical faith” (77).

Lewis’s broad outline of “mere Christianity” proved elastic—even Roman Catholics and Orthodox readers could read him as their own (131), and eventually mainline Protestants embraced him. (If Lewis was a gateway to Roman Catholicism for some disenchanted American evangelicals, Marsden notes that Lewis’s upbringing in Northern Ireland was sufficient deterrence from journeying to Rome himself.) Yale’s Paul Holmer praised his writings that “have a way of fitting every reader” (111). Especially among women, Lewis had an eager audience, even if his writings were a tad misogynistic, even for his time.

For his part, Lewis never claimed to be a theologian. His real contribution lay in demonstrating that reason and imagination could both be put to use in defense of historic Christianity. Christianity proved to be both true science that was more reasonable than scientism and true myth that challenged the false myth of evolutionary progress (which gave rise to the modern conceit of “chronological snobbery,” in Lewis’s famous expression).

Interest in Lewis waned after his death in 1963, but the presidency of Jimmy Carter and the conversion of Chuck Colson prompted a second wave of interest in Mere Christianity and the intellectual credibility it provided to the evangelical movement that was commanding unanticipated headlines in the American media. Today, movies of Narnia keep him popular, and C. S. Lewis institutes and societies abound.

Mere Christianity resembles other BBC productions in its way of generating imitators. Marsden traces the influence of Lewis on contemporary writers such as N. T. Wright and Tim Keller, and his “biography” provides readers with much incentive for returning to the original.