For Me to Live Is Christ: The Life of Edward J. Young 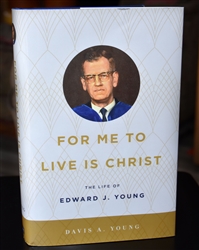 For Me to Live Is Christ: The Life of Edward J. Young

For Me to Live Is Christ: The Life of Edward J. Young, by Davis A. Young. Committee for the Historian of the Orthodox Presbyterian Church, 2017. Hardback, 349 pages, $10.00 at OPC.org. Reviewed by OP minister Thomas S. Champness, Jr.

A rich treasure awaits in this warm, well-written book in which a son honors his father—a true labor of love. Davis Young traces the life of Edward J. Young from his birth on November 29, 1907, to his death on February 14, 1968. Not only do we learn of Dr. Young’s life and labors, but also much of the history of Presbyterianism in twentieth-century America, as well as the history of Westminster Seminary and the Orthodox Presbyterian Church. But what we have here most of all is the life of a man of God who labored tirelessly in the service of God and his fellow man until his great heart finally gave out.

The trajectory of Young’s life was set early on. In his midteens “he felt called to Christian ministry” (9). He began his study of Latin and Greek in high school and went on to major in Greek and minor in Latin at Stanford University where he also studied Hebrew, Aramaic, French, German, Syriac, and Russian. After graduating from Stanford in 1929, Young devoted the next two years to studies and travels in the Middle East and Europe before entering seminary in 1931.

Young’s winsomeness shines through on these pages. “Lay people did not feel intimidated by him because he carried his prodigious learning so lightly. He was humble, self-deprecating, and enjoyed lighthearted banter” (234). When first invited to join the distinguished faculty at Westminster Seminary, Young wrote Paul Woolley that he was “rather stunned” by this invitation and went on to say: “The only serious obstacle is the fact that I feel so utterly incompetent to teach Old Testament” (88).

Many have commented on Young’s courtesy and respect shown to those with whom he disagreed. Perhaps no one appreciated this more than his own son. Davis testifies that from his father he gleaned the crucial distinction between the person and the idea. “From him, I learned always to be courteous and respectful toward those with whom I disagreed. By example, I was taught to be fair and to represent opposing viewpoints accurately and politely” (274).

One of the decided strengths of the book is the masterful summaries of Young’s books, such as My Servants the Prophets, Who Wrote Isaiah?, Prophecy of Daniel, Arabic for Beginners, and An Introduction to the Old Testament. In addition, the author’s footnotes contain brief but helpful explanations of such diverse subjects as modernism and dispensational premillennialism (49), Ras Shamra (116), and the Zadokite Fragments (209).

How salutary it would be if this biography serves as a powerful stimulus to many—a stimulus to continue resolutely in Young’s courageous and learned battle for orthodoxy; a stimulus to the study of Scripture in its original languages; a stimulus to strive for transparent clarity in written word and speech; a stimulus to honor our parents as Davis does so well in this volume; and a stimulus to read and treasure the writings of Young himself. And who will take up the challenge to read aloud four verses a day of the Hebrew text of Isaiah along with Young’s lucid commentary?

The loss of Young at a relatively early age was a heavy blow to many, but to none more than his own immediate family. Lillian’s account of her husband’s death is poignant. In the epilogue Davis writes:

My mother has long since joined my father in the presence of the Lord Jesus, and one day my sister and I will as well. How thankful to our sovereign God my sister and I are for the years our father was with us, the love he showed, the example he set, and the memories he left with us. God’s overflowing grace has sustained us over the years, and we look forward to a reunion in the life to come.” (332)