The Christ of Wisdom: A Redemptive Historical Exploration of the Wisdom Books of the Old Testament 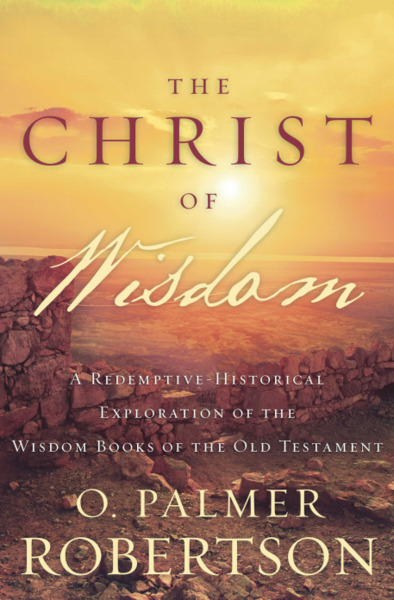 The Christ of Wisdom: A Redemptive Historical Exploration of the Wisdom Books of the Old Testament

The Christ of Wisdom: A Redemptive Historical Exploration of the Wisdom Books of the Old Testament by O. Palmer Robertson. P&R, 2017. Paperback, 432 pages, $15.00. Reviewed by OP minister and professor Peter Y. Lee.

This is a helpful book on the wisdom literature of the Old Testament by Dr. O. Palmer Robertson. It provides useful, and indeed often outstanding, commentary. For instance, Robertson offers a way to preach/teach Proverbs 10–31 by identifying wisdom themes (74–99) that can function as sermonic topics.

He also briefly comments on the relationship of biblical law and wisdom. This was insightful, and I would have appreciated further reflections on it. After all, no matter how helpful wisdom literature is, we still are unable to live wisely due to our fallen nature. Just as there is a three-fold use of the law, couldn’t there also be a three-fold use of wisdom? He never presses this relationship, but his thoughts would have been valuable.

In Job, he points to the abundance of images in chapters 3–37 and the powerful way in which they are utilized to communicate the message of the book. He states, “Without the figures of speech, the whole piece of literature would fall flat. But with the images, the book comes to life” (139). As with his comments on Proverbs 10–31, this is helpful for preaching purposes.

In Lamentations, Robertson shows the interconnection between the outstanding literary form of the book (numerous acrostic poems) and its overall message. However, Robertson often equates the suffering of the city with the sufferings of Christ (298, 303). I wonder if this is a legitimate parallel, since Israel suffered due to their sins, while Christ did not. The former needed to repent, but not the latter.

Some of Robertson’s thoughts on Ecclesiastes and Song of Songs were not persuasive to me. For example, he says the Song of Songs is not about Christ per se. Rather, it is about human love and the effects of Christ’s redemptive work (334; 338–39). As true as this may be, it is a rather disappointing conclusion for a book that wants to focus on the Christ of Wisdom.

The most obvious weakness is that Robertson includes two books that are not traditionally examples of wisdom literature, namely Lamentations and the Song of Songs. He says that the wisdom books may be called the “how-to books” of the Old Testament. Thus, he offers the following summary for each book—Proverbs: How to Walk in Wisdom’s Way; Job: How to Puzzle; Ecclesiastes: How to Cope with Life’s Frustrations; Lamentations: How to Weep; Song of Songs: How to Love. His explanations for the inclusion of Lamentations and Song of Songs in this list is unpersuasive, even confusing. From this explanation, all Scripture could be understood as wisdom instruction. Any distinctive features of Proverbs, Job, and Ecclesiastes are now lost. Yet, given the insightful comments of Robertson, to have more from him is hardly a problem.

The greater weakness of the book is highlighted from its title, The Christ of Wisdom: A Redemptive Historical Exploration of the Wisdom Books of the Old Testament. When I saw this, I was very enthusiastic since there is a lack of redemptive historical and Christocentric treatments of the wisdom literature. But, disappointingly, the book was neither strongly Christocentric nor redemptive historical. Robertson says that redemptive history moves not only in a linear fashion but also cyclically. This cyclical pattern is found in the daily aspects of life: the cycle of daily sin, father-son relations, dialogue amongst friends, coping with frustrations of life, etc. (xvi–xvii). In essence, he redefines the term “redemptive history” and thus turns our attention from history to daily living.