Uncovering the Theme of Revelation in Romans 1:16–3:26 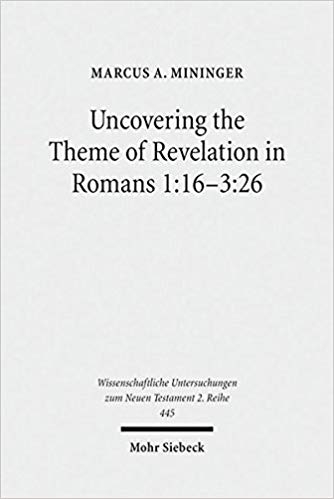 Uncovering the Theme of Revelation in Romans 1:16–3:26

Orthodox Presbyterian minister and Mid-America Reformed Seminary professor Marcus Mininger has contributed an important monograph to the exegetical understanding of Romans 1:16–3:26. Mininger maintains that both the traditional soteriological and revisionist social understandings do not recognize properly the theme of revelation as the key leitmotif of the passage. That’s not to say that Paul is indifferent to soteriological or social issues. Rather, Paul’s claims about revelation lead to conclusions about soteriology, which has social implications.

The revelation central to the argument (“the topic of revelation does indeed run like a backbone throughout,” 39) concerns the visible display of things that are otherwise invisible. God through various supra-human powers—the power of God, of the Law, and of sin—reveals what is hidden.

In Romans 1:16, Paul asserts that the gospel is God’s power unto salvation for all who believe, both Jew and Greek. Verse 17 describes a present state of affairs in which God’s righteousness is now revealed through what he has previously done in and through Christ. “Romans 1:17 describes the revelation of God’s righteousness in that which was pre-promised and now has been fulfilled through the redemptive career of God’s Son” (97). This revelation is not reducible to the themes of justification by faith, God’s saving activity or power, or other themes that are often focused upon, although each is an indispensable part of the gospel.

According to Mininger, this pattern of showing what is or is not revealed by God drives Paul’s argumentation. Romans 1:18 puts forth the revelation of God’s wrath from heaven upon an unrighteous portion of humanity. Romans 1:19–32 tells how God’s wrath comes to visible expression upon these truth-suppressors. Paul is not saying in these verses that unrighteousness deserves or leads to judgment, but that God’s handing some over is followed by an outpouring of human unrighteousness. Mininger notes that this was the case in Psalm 106. Israel exchanged the glory of God (Ps. 106:20; compare Rom. 1:23) and was handed over by God in wrath (Ps. 106:40–41; compare Rom. 1:24, 26, 28).

In Romans 2:15–16, the Law is shown inadequate to be the power of God unto salvation because what is revealed in it cannot affect salvation. This argument continues in Romans 3:9–20. All flesh will not be justified through the works of the Law. That which is invisible, the effects of sin’s power, is seen in the Law’s domain. “In short, if the situation in the Law looks essentially the same as the situation outside the Law, then the Law is no basis for eschatological distinction and every mouth is indeed shut” (318).

In this reviewer’s judgment, Mininger’s redemptive-historical reading of the text provides answers that have troubled exegetes, while still affirming key gospel insights. There are a few reservations for the ordinary reader. First, a knowledge of Greek is highly recommended. Second, the cost may be prohibitive.