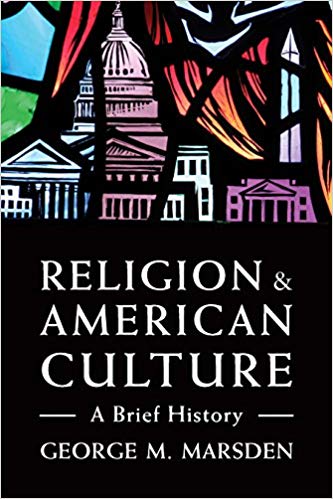 Many assessments of the 2016 presidential election tie President Trump’s appeal to white Protestants especially through his use of symbols, rhetoric, and images that signal the nation’s white Christian past. The campaign slogan “Make America Great Again” is then, in effect, a code for “restore white hegemony.”

George M. Marsden’s book Religion and American Culture, a revision of the original 1990 version, upsets unintentionally the prevailing view of evangelicals and Trump. The book’s point is not to address the current set of arguments and outrage. It is a broad overview of religion in America that explains the mainstream culture, which religion was closest to the center, which groups were on the margins, and how such outsiders negotiated the dominant culture. Without surprise, that approach to American culture puts Protestants of British stock at the center of the nation’s history and institutions. Without intending either to applaud Trump or criticize his evangelical supporters, Marsden does lay out a narrative of American history that identifies white Protestants as the most prominent group from the colonial era down to the 1950s. Whether America was great during that period is not a question that interests Marsden. But any reader could easily take away the impression that over the last seventy years, white Protestantism has declined. For anyone who regards the fall of Protestantism as undesirable—either by measures of church health or by cultural indicators—Marsden’s book offers indirect support.

By the middle decades of the nineteenth century, a broadly “Puritan-evangelical” tradition had emerged as the dominant persuasion in America. This Protestant mainstream animated the Whig and Republican parties, informed most colleges, and provided the basis for interdenominational cooperation among the largest communions. During the Progressive era, Protestants forged even greater unity as they cooperated in political and cultural institutions. The characteristic premises of that Protestant outlook were: “1– the superiority of Western civilization, 2– that Anglo-American democratic principles were the highest political expression of that civilization, and 3– that these principles were almost bound to triumph throughout the earth” (98). Such assumptions came in for critical scrutiny during the 1920s by fundamentalists who were not convinced that the United States was on the right side of history. But despite the detour of denominational controversy, Protestants retained their privileged stature in the nation’s most influential institutions. Although the 1950s saw the inclusion of Roman Catholics and Jews into the mainstream of Tri-Faith America, “the default religion in the cultural mainstream was one or another kind of Protestantism” (202).Finally, in the midst of feminism, the sexual revolution, and anti-Vietnam War protests during the 1960s, the mainstream became secular. In Marsden’s terms, the United States no longer possessed a mainstream culture. What emerged in the 1970s instead was a standoff between defenders of traditional morality and advocates of tolerance and pluralism. By the first decades of the twenty-first century, a mainstream culture, Protestant or otherwise, has yet to fill the void. Marsden’s conclusion comes in the form of a question: can the United States “cultivate a pluralism that encourages so many varieties of religious and secular groups to live together in peace, despite some irreconcilable differences” (266)? As a historian, Marsden resists predicting the future, but his conclusion remains: the nation’s older forms of consensus (largely Protestant) are gone.