Between Wittenberg and Geneva: Lutheran and Reformed Theology in Conversation 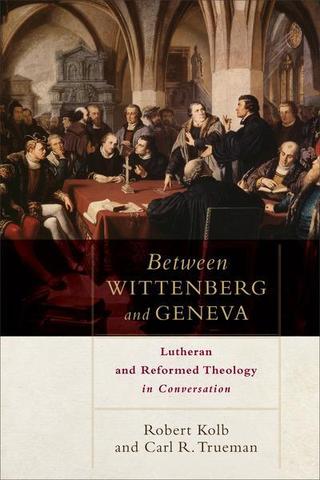 Between Wittenberg and Geneva: Lutheran and Reformed Theology in Conversation

Luther’s pounding fist on the table at the Marburg Colloquy emphatically declared to Zwingli that hoc est corpus meum (“this is my body”) referred to the literal body of Christ. This action signaled that the Lutheran and Reformed wings of the Protestant Reformation would remain distinct and divided. Since then, Lutheran and Reformed theologians have continued to engage in dialogue to explore the prospects of resolving debated issues.

The most recent entry in this ongoing discussion comes from two well-respected and accomplished theologians and church historians, Robert Kolb and OPC minister Carl Trueman. Kolb and Trueman do not debate but rather converse in print regarding the similarities and dissimilarities between the Lutheran and Reformed traditions. The book has eight chapters that cover the waterfront: Scripture, law and gospel, the doctrine of Christ, election and the bondage of the will, justification and sanctification, baptism, the Lord’s Supper, and worship. In each chapter, Kolb and Trueman address these doctrines from the vantage points of their respective traditions.

In the chapter on law and gospel, the authors note that both traditions share these doctrinal categories (48–49). But Trueman helpfully identifies the different ways that law and gospel function in the two traditions. The Reformed, argues Trueman, historically place greater emphasis on the third use of the law, whereas for Lutherans the pedagogical receives greater attention (49).

Another area of shared substantial agreement between the two traditions is on the doctrine of justification. For both traditions, union with Christ, the Savior’s work, the instrumentality of faith, and imputed righteousness are common elements. Evidence of Reformed and Lutheran agreement appears in Calvin’s subscription to the Augsburg Confession Variata (133–34). But where the dissimilarities surface is in how the Reformed take this doctrine and integrate it in the Christian life in concert with sanctification, an emphasis to which some Lutherans might object. One must walk a tightrope to ensure that the quest for greater sanctification does not fall into legalism on the one side or antinomianism on the other (145).

At a time when caricature and unfamiliarity with basic primary source texts abound, Kolb’s and Trueman’s book is a welcome respite from the noisy din. Both write with clarity, depth, and an excellent, historically grounded knowledge of their respective traditions. This is a must-read for any person who wants to know where the agreements and disagreements lie between the Lutheran and Reformed traditions.