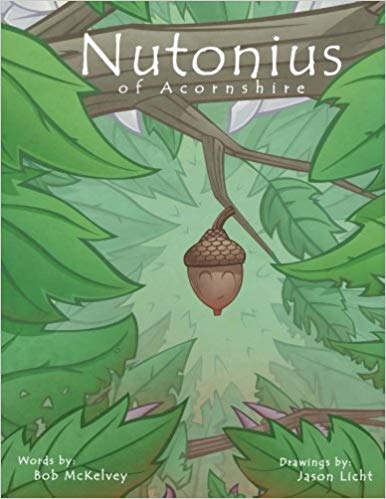 “Just the facts, ma’am,” was Sgt. Joe Friday’s refrain on TV’s Dragnet when witnesses would stray from the bare bones of their stories. This might be prudent in criminal investigation, but, when dealing with undoubtedly the greatest story ever told, this will never do. Our Lord rarely spoke without use of parable to give visceral meat (as well as to conceal) the truth he was conveying. Therefore, it is always a joy to see Christians exercise their sanctified creativity to bring forth from their treasure “something new and old” in the proclamation of the gospel. Nutonius of Acornshire, by Bob McKelvey with illustrations by Jason Licht, does just this. Written for ages six to twelve, it is a new allegorical telling of the old, old story. McKelvey, an OPC pastor, first prepared this tale for his young children and now presents this fully fleshed out version to us.

Loosely based on Bunyan’s The Holy War, our main character, Nutonius, is fallen like the town of Mansoul. Except, in his case, being an acorn, he is literally fallen from a mighty oak. He is doomed to perish like all other acorns under the clutches of a particularly nasty squirrel named Scatterhoard, appropriately illustrated with jagged menace by Licht. Of course, as in all Christian allegory, redemption must come in a personal form, and in this forestry setting the wise and powerful Snowy Owl swoops in to save our despairing protagonist. The noble owl, having once suffered death at the squirrel’s hands yet rising to newness of life, ultimately delivers the enemy a gruesome and deadly wound. This enables Snowy Owl to snatch at will our powerless acorn from Scatterhoard’s decaying dungeons.

Unlike The Holy War, Nutonius mainly focuses on the basics of the redemption story and does not go into depth on the lifelong gauntlet of the world, the flesh, and the devil, that the redeemed must pass through. This aspect of the Christian life is often glossed over when relaying the Good News, which may cause some a rude awakening when confronted with taking up one’s cross, mortifying the flesh, and bearing this world’s tribulations and the wiles of the evil one. Nutonius mildly touches on this during his sometimes-harrowing ride in the Snowy Owl’s talons, but perhaps Mr. McKelvey will use his talent for allegory to delve deeper, à la Bunyan, into identifying the methods of and means of confronting our adversaries lest his young readers be ignorant of their devices. One hopes he will.