The Presbyterian Philosopher: The Authorized Biography of Gordon H. Clark 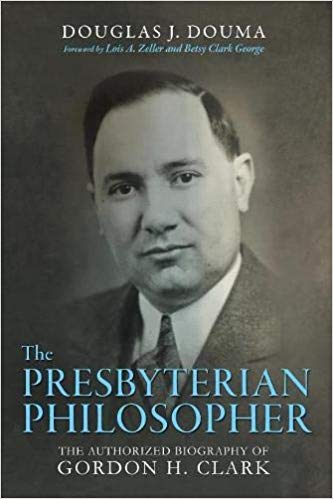 The Presbyterian Philosopher: The Authorized Biography of Gordon H. Clark

Is this book hagiography or a critical look at the subject in his context? I believe that this volume, despite some mild criticism of Gordon H. Clark here and there, tends to the former, particularly seeking to serve as a corrective to what is perceived to be “bad press” about Clark. Clark has indeed received censure with respect to some events in his life, particularly surrounding his seeking ordination in the OPC’s Presbytery of Philadelphia and crossing swords with Cornelius Van Til in the process.

Clark claimed that human knowledge vis-à-vis divine knowledge is univocal, which is to say, that there is an identity between God’s knowledge as Creator and ours as creatures. To be sure, Clark conceded, God knows in a far greater measure than we do: his knowledge is, in every respect, of an incomparably greater degree than ours. Van Til argued that human knowledge in this respect is analogical, which is to say, that it is both like and unlike God’s knowledge. The difference, in other words, is not just in degree but in kind. God is a different kind of being than humans, an affirmation that is key to the Creator/creature distinction, which Van Tilians commonly allege that Clark failed to make.

With respect to all the facts of Clark’s life, as far as I can tell, Douma gets it right (except for the significant omission about Clark’s view of saving faith). Clark is an important figure in twentieth-century church history, which Douma explores. This book is valuable and worth reading for that reason alone. To the chagrin of some like Edmund P. Clowney, Douma notes, critics have labeled Clark a rationalist. I do not believe that Douma has cleared him of this, either with respect to Clark’s position on univocal knowledge and divine simplicity or with respect to Clark’s position on saving faith.

One of the most egregious positions staked out by Clark theologically is his position on saving faith. Saving faith, as Clark asserts time and again in two works on the subject, consists in intellectual assent to the propositions of Scripture, most particularly to the propositions that define the way of salvation (What is Saving Faith? 82–88). What is important here is that Clark defines faith as “assent alone.” All the Reformers rejected such an intellectualized definition of faith, insisting that it properly consisted not only of notitia and assensus (knowledge and assent), but also crucially and formatively, of fiducia (trust). In this work on faith, Clark repeatedly asserts that he does not know what this “something else” that is needed in addition to knowledge and assent is. His rationalism does not seem to permit him to recognize what “trust” is, and he repeatedly evacuates faith of trust, believing that anything in addition to assent must be a work foreign to the biblical notion of faith. I belabor this to note that there is no discussion of this whatsoever in this volume by Douma. Even if one deems that Douma has rehabilitated Clark with respect to the Clark-Van Til debate, Douma’s failure to engage Clark’s deficient view of faith is a serious shortcoming in this work.

The more recondite debate about whether human knowledge is analogical or univocal with respect to God’s knowledge may not be clear, especially to those untrained philosophically. The person in the pew, however, can recognize that to define faith in a way that robs it of trust, which is personal, and reduce it to a knowledge of and assent to propositions, is an inadequate, rationalistic view of faith that is not what the Scriptures teach, and a view not held by the Reformers or our doctrinal standards. Clark’s reputation as a rationalist is a just one, and we must be especially careful to repudiate his deficient view of saving faith.

Those who are interested in a more extensive analysis of this book should see my review in Mid-America Journal of Theology 28 (2017): 196.