Survival and Resistance in Evangelical America: Christian Reconstruction in the Pacific Northwest 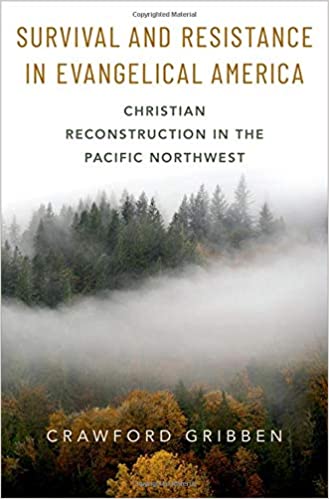 Survival and Resistance in Evangelical America: Christian Reconstruction in the Pacific Northwest

Christian Reconstructionism is a theological and cultural movement marked by a postmillennial vision that hopes and expects to see earthly society governed by biblical law. Some readers may think that it is a faux pas to review a book about Reconstructionism in the Pacific Northwest, since it appears to some that Reconstructionism is waning. For example, Michael Vicar, in Christian Reconstruction: R. J. Rushdoony and American Religious Conservatism (University of North Carolina Press, 2015) has even announced its death. Others, however, like Julie J. Ingersoll, Building God’s Kingdom: Inside the World of Christian Reconstruction (Oxford University Press, 2015), have signaled the ongoing influence of Reconstructionism and the man considered its founder, R. J. Rushdoony. And, while some may even think that too much attention (or credit?) is given to Rushdoony, let’s not forget that Newsweek magazine once identified Rushdoony’s think-tank, the Chalcedon Foundation, as exerting tremendous power within the Religious Right. The position of Gribben’s book is that Reconstructionism, along with its cousin, theonomy, is still influential in North America, still receiving authority indirectly within conservative politics and especially, more directly, in the homeschooling movement.

His book is useful because it demonstrates that theonomy has changed and developed in recent decades, especially with the migration of many likeminded Reformed people to survive, resist, and reconstruct in the culture-building projects in Moscow, Idaho, and surrounding areas that are especially connected to Douglas Wilson and those associated with him (though Gribben makes the case that the “Moscow movement” never sought to influence politics inside the Beltway). This is something that should be of immense interest to those in the OPC, since so many parents have chosen homeschooling or Christian private schools over public schools. Gribben (like the authors noted above) has demonstrated the profound influence that Rushdoony and his followers have had on the homeschooling and Christian education movement (noteworthy, e.g., is the recognition of Dorothy Sayer’s famous article “The Lost Tools of Learning”). Gribben’s aim in this book is to demonstrate that Reconstructionism (or theonomy) has remade itself into a “Redoubt” movement (a small and defensive fortification within a fortification), which has hunkered down in the Pacific Northwest of the United States, particularly in Idaho and the eastern side of the state of Washington.

The book is comprised of an introduction, followed by five chapters, and then summary statements in the conclusion. Chapter 1 describes the migration movement to Idaho and its environs with lots of evidence marshalled from the likes of Rushdoony, Gary North, and James Wesley Rawles. Chapter 2 describes the movement’s promotion of a postmillennial eschatology. Chapter 3 describes the goal of the Redoubt movement: to repristinate Christendom. Chapter 4, perhaps the most interesting and important for members of the OPC, discusses the Redoubt movement’s influence on education. Reading this chapter will (and should) alarm many in the OPC. The fifth chapter is on “Media,” specifically about how successful the Redoubt movement has been in its use of media and promoting a middle- or even high-brow culture.

Although reading this book will be disturbing and shocking for some members and ministers in the OPC, the book is recommended for those who want an honest analysis of the Redoubt movement in Idaho and its surrounding environs.