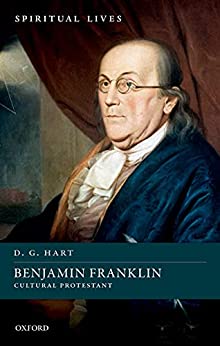 D. G. Hart offers a thoughtful counter to those conservative Christian writers who portray America’s founders as essentially Christian despite those founders’ rejections of core Christian doctrines. Hart makes it clear that Franklin remained far from any traditional Christian faith. In fact, Hart seems to have a hard time taking Franklin’s religious expressions seriously. Characterizing the famed inventor’s outlook as “moralistic providentialism” (241), Hart remarks that Franklin is often overestimated as a thinker. He was, in Hart’s view, more a tinkerer and dabbler in everything and “his religious reflections, although voluminous, were not profound” (244).

Such dismissive attitudes may seem odd for a volume in a series on “spiritual lives.” Hart’s assessment seems to be that Franklin, despite being shaped in many ways by his Puritan upbringing, hardly had a spiritual life. Franklin paid a lot of attention to religion, sometimes attended services, contributed to churches, and supported religious activities such as the evangelical revivals of George Whitefield. Yet Franklin’s expressions about religion, in Hart’s account, seemed largely pragmatic—for promoting morality and the public good.

Hart nonetheless offers a fresh approach to thinking about Franklin and religion. One factor in seeking such an approach likely is that he wanted to offer an account that differed from Thomas Kidd’s recent Benjamin Franklin: The Religious Life of a Founding Father (Yale, 2017). Kidd presents Franklin, despite his lack of orthodoxy, as having a real spiritual life, always wrestling with the Puritan legacy of his youth and seeking for meaningful substitutes. (Disclosure: Kidd is a former student of mine. Hart is a former research assistant. Both are good friends.) Hart mentions Kidd’s book appreciatively, but then turns in another direction.

Rather than dwell on Franklin’s spiritual life or personal struggles with religious questions, Hart emphasizes Franklin’s Protestant heritage. His central thesis is that Franklin can be viewed as a “cultural Protestant” (5). Hart accordingly points out all sorts of things in Franklin’s outlook and career that have Protestant antecedents. Protestantism had strong urban roots that offered precedents for Franklin’s civic reforms. Protestantism was connected to the rise of science. Protestantism had a close relation to the flourishing of printing. Protestants promoted higher education. Protestants fomented revolution. The most evident and perhaps consequential of these connections is that Franklin’s emphasis on morality echoes Puritan moral rigor. Hart rightly sees Franklin as a paradigmatic figure in the transition from Puritan piety and self-denial to later American moralism and self-help. Eventually views such as Franklin’s became acceptable fare in some liberal Protestant churches.

Hart is a skillful historian, and his biography of Franklin offers compact, fact-filled, and well-informed accounts of the highlights of Franklin’s life and work. He bases these narratives on the best interpretations found in the many previous Franklin biographies, citing these directly in the text. So if readers are fascinated by Franklin’s truly impressive variety of activities and achievements, here is a place to find concise overviews of those, together with reminders of their Protestant origins.

One of the most famous and intriguing expressions of Franklin’s religious interests was at the US Constitutional Convention, when the revered octogenarian proposed that they might succeed better if they opened their sessions with prayer. He reminded his colleagues that the early patriots had often prayed and had seen success. “Our prayers, Sir, were heard and they were graciously answered” (225). His motion got very little support.

Hart at first seems to dismiss these remarks as “Franklin’s resort to God as a safety net for the new nation” (216). Yet in his concluding two pages, he offers that there is “one exception” to his finding that Franklin’s religious views were “not profound” (244). That is “a Christian doctrine in which Franklin compares favorably to Abraham Lincoln” (244). The unorthodox providentialism of the two men was similar. So, says Hart, “if historians may plausibly claim Lincoln as one of the profoundest Christian thinkers of his era, certainly there is room for Ben Franklin’s membership in the club” (245).

This is puzzling. Having presented so many of Franklin’s religious views as superficial, Hart on the last pages seems to want to rescue something of Franklin’s reputation as a religious thinker who deserves our attention. The problem is that two formally similar versions of unorthodox providentialism may not be equally profound. And Franklin’s version hardly “compares favorably to Lincoln’s.” Historians and many others consider Lincoln’s reflections on providentialism profound because he probed so deeply some agonizing paradoxes, including that of deadly enemies praying to the same God. Franklin’s providentialism, so far as the records show, seems to be mostly of the self-interested sort, as in invoking the divine aid for the success of one’s own nation. Overall, Franklin may have been a less superficial religious thinker than Hart typically gives him credit for, but his “moralistic providentialism” seems no deeper than the rest.