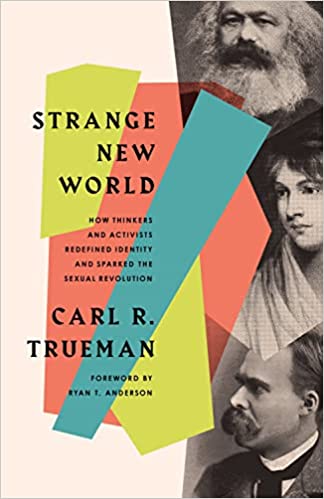 This is an important book. If there is such a thing as “essential reading,” this book should be on the list for most members of the OPC. Parents of preteens and teenagers especially should read this book with their children—and discuss it thoughtfully.

Like Francis Schaeffer tried to do in the late 60s and 70s, Trueman here is trying to explain—to a general Christian readership overwhelmed by contemporary cultural realities—how we got here. He writes:

Sooner or later every single one of us is likely to be faced with a challenging situation generated by the modern notion of selfhood. And this means that for all of us the questions of how we should live, and what we should do when facing pressure to conform, are gaining in urgency. (170)

It is likely impossible to present a watertight account of why we modern men and women think intuitively about the world in the way that we do. Yet one can certainly offer an account that piles up various necessary preconditions for this and observe how these tend to tilt us in a particular direction. (108)

First, Trueman lays out the meaning of some of the key ideas he will be dealing with, beginning with the idea of “the self.” Biblically, the “self” is understood fundamentally in terms of human beings being created by the Triune God “in his image.” Traditionally, at least in Western civilization, even nonbelievers have assumed that the “self” has a fixed nature.

Through the intellectual history that Trueman traces, this idea of “selfhood” becomes increasingly “plastic”—i.e., to be understood in subjective and therefore relativistic terms. The “self” is what each person makes it, without necessary reference to religion, social traditions, or (today) even physical/biological reality.

To challenge this autonomous understanding of “the self,” is to become an “oppressor.” Such oppressors should be sanctioned—socially, and even politically.

In his survey, Trueman traces the collapse of traditional, external anchors of identity, the way in which the loss of sacred order and the rise of technology—not to mention the social influence of powerful political, educational, cultural, and business elites—have contributed to the contemporary situation.

Beginning with Rousseau and the English Romantic poets, he explains the way in which the ideas of thinkers like Marx and Freud, Wilhelm Reich and Herbert Marcuse have “trickled down” to shape the “social imaginary” (i.e., how a society collectively and instinctively thinks about the “big issues” of life, often without knowing why) of millions in the postmodern West. It’s not a pleasant story . . . but a vital one for us and our children to understand.

Because we are all immersed in this “social imaginary,” Trueman further argues that contemporary Christians are far more influenced by the modern understanding of “self” than we may appreciate. That, in part, is why he’s writing this book.

The reader may ask, “Can anything be done?” Some may wish that Trueman had more to say in answer to that question, but that is for another book. For now he reminds us that “God is sovereign, God plays the long game, and God’s will shall be done, on earth as it is in heaven” (178).

The good news is that the solution is (as it has always been) faithfulness to the God we claim to love and worship. We must deliberately teach “the whole counsel of God,” and live out its implications in our congregations, families, and in our contact with our communities.

The culture is most dramatically engaged by the church presenting it with another culture, another form of community, rooted in her liturgical worship practices and manifested in the loving community that exists both in and beyond the worship service. . . . The church protests the wider culture by offering a true vision of what it means to be a human being made in the image of God. (176)

A final note, Strange New World is aimed at a broader audience than Trueman’s “big book” (The Rise and Triumph of the Modern Self, 2020), but is sufficiently different in presentation as to repay its own reading.