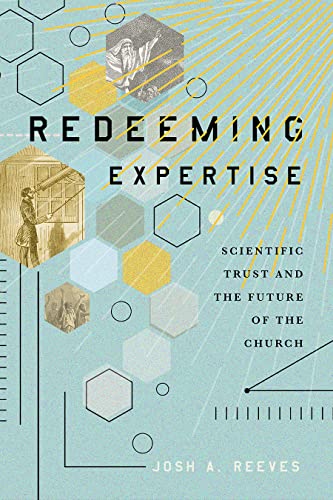 The title of this work by Samford University professor and philosopher Josh Reeves invites comparison to a number of works by Vern Poythress with similar titles, such as Redeeming Science. While Poythress is concerned with science as a body of knowledge, Reeves is concerned with the expertise of scientists, which includes not only their knowledge, but also the scientific practices and cultural institutions that validate it and foster the public’s trust. In viewing expertise as a social phenomenon, Reeves is on solid ground. Virtually all that we know is based on the testimony of others, and the authentication of experts builds trust in our sources of knowledge.

For Poythress, the presupposition is that every sphere of human endeavor has been corrupted by sin. Redeeming one of them means that the corrupting influence of sin must be exposed, analyzed, and corrected by the gospel. For Reeves, on the other hand, the problem lies not with science but with Christians who reject it. Therefore, he gives little attention to correcting scientific expertise by the application of gospel truth. Rather, he aims to persuade evangelical Christians, whom he characterizes as anti-expert (7) and therefore populist (8), to accept the current scientific consensus. Two key scientific theories that he believes evangelical Christians should accept are evolution and global warming.

Reeves devotes a chapter to the history of Christian skepticism toward experts. He traces the development of science not in its content but in its methods and institutions. Specifically, the scientific enterprise has developed from an activity that could be pursued by solo amateurs in the seventeenth century to a huge, university-based enterprise conducting experiments that require billions of dollars of funding and dozens to thousands of scientists and support personnel in the twenty-first century. In part because of this institutionalization of science, Reeves argues, we have no choice but to trust its findings.

Reeves identifies three common reasons why Christians mistrust experts. First, scientists are committed to naturalistic presuppositions. Second, unbelieving scientists lack the assistance of the Holy Spirit in observing and interpreting the natural world. Third, giving up intellectual autonomy will leave the church at the mercy of an intellectual elite. He devotes a chapter to each of these reasons, explaining why they are not persuasive.

Then Reeves begins to build his case for trust in experts, arguing for a middle ground between “blind trust and populist skepticism” (99). He includes a chapter on the limitations of science. At the risk of oversimplifying, Reeves’s argument can be boiled down to three principles: (a) It is impossible to know more than a handful of disconnected bits of science without trusting in the testimony of others; (b) The testimony of experts is far more valuable than the testimony of uneducated amateurs; (c) Therefore, we must have a way of identifying who the experts are.

The means of identifying experts is the public university. Reeves defends the secular university system as a truth-seeking institution, where differing viewpoints are subjected to searching critique. For this system to work, divergent viewpoints must be represented. While conceding that university faculties are politically skewed far to the left, which means that certain ideas may be dismissed without a fair hearing (162), he concludes that “nonetheless, the overall system is the best one for uncovering truth between rival groups” (165). In my opinion, Reeves underestimates the degree to which public universities have been co-opted by leftist ideology, which trades on the reputation of the university as a truth-seeking institution in the interests of authoritarian propaganda.

Reeves crystallizes his point in his tenth and final chapter:

These leaders—over half of evangelical pastors think the world is less than ten thousand years old—damage the credibility of Christianity through scientific ignorance. As Augustine says, “It is offensive and disgraceful for an unbeliever to hear a Christian talk nonsense about such things, claiming that what he is saying is based in Scripture.” (180)

The intellectual task for Christians is not to reject all scientific information that does not fit into traditional doctrines, but always to be reforming theology in the light of new knowledge. (184)

But Reeves is still willing to draw lines in the sand against some pretensions of modern scientists, such as the mechanistic view of psychology, the denial of the real existence of the self or consciousness, and the denial of the possibility of miracles (184). He argues briefly that these beliefs fall outside the legitimate limits of science. In my opinion, he does not give a satisfactory argument why this is not also true for at least some aspects of evolutionary theory.

I would cautiously recommend this book for pastors, elders, and college study groups who are interested in the interactions between theology and science. Disagreement with Reeves’s position on evolution should not diminish appreciation for his primary concern with the centrality of testimony as a basis for knowledge and the resulting importance of social institutions that authenticate both knowledge and expertise. Further reflection and discussion on these ideas could prove to be fruitful. The following reflections may be suggestive: (1) The theory of expertise could naturally be tied to Kuyper’s theory of sphere sovereignty. (2) The role of the church in proclaiming the truth of the gospel should be more fully explored in relation to the role of academic institutions. (3) The legal system is the institution that has given the most attention to testimony and how to evaluate its credibility. Insights from the law, applied to science and expertise, could prove to be illuminating. (4) Some cultural critics have noted that the liberal world order rests upon a technocratic elite, whose expertise often trumps individual freedom, including religious liberty. What happens when expertise is co-opted for political purposes? How do we speak truth to power when power claims to possess omnicompetent expertise?