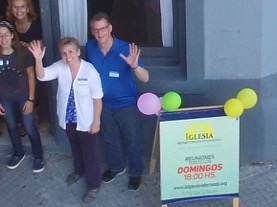 S.T.O.R.M. Report (May 22, 2019) A trend on the rise in the OPC is married couples or pairs of friends setting out "two by two" in response to the need for volunteers on a foreign or domestic short-term mission or disaster response field. Mark 6:7 ...he called the twelve and began to send them out two by two. Luke 10:1 ...the Lord appointed seventy-two others and sent them on ahead of him, two by two.

Short-term missions does not just have to mean joining a large established team or trip. More and more friends and couples are finding opportunities to serve as a team of two!

In the last few years, husband and wife teams have:

A father and son team helped lead the English for Teens Bible Camping trip in Quebec; a father and daughter team served alongside two husband and wife teams rebuilding the kitchen at Keys OPC.

Two-man teams have traveled to Uganda to make missionary home upgrades and repairs; a two-man team from Wisconsin travels to Haiti on a regular basis to perform a variety of maintenance projects.

It's not too late to participate in short-term missions this summer! Click HERE for openings for individuals and church groups!

Visit the new Disaster Response website for updates on hurricane relief in North Carolina and Houston, refugee relief in Georgia, and more.

Find current and past issues of the S.T.O.R.M. Report at OPCSTM.org.