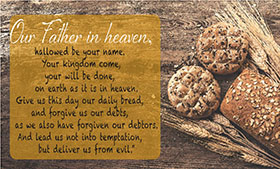 Give Us This Day Our Daily Bread

The New Year has come with the joy of looking ahead to a fresh start and new opportunities, but also with the sad realities of this lost world. Just halfway into January, we are faced with more destruction for Puerto Rico. The already taxed and delicate infrastructure of Puerto Rico is faced with more power outages, damage and interrupted communication. As we keep an eye on what the physical needs of the three OP Churches may be, please consider prayer as our first response. Thoughts of daily bread come to mind as we reflect on the basic needs, both spiritual and physical. Pray in earnest for Puerto Rico as they fear aftershocks and more damage, and that we might know how to best aid them.

Please be in prayer for the saints in Puerto Rico. The island suffered a 6.4 magnitude earthquake on January 7. According to news sources, Puerto Rico has been experiencing tremors since December 28, 2019, and many are afraid to go inside a structure and are sleeping outdoors.

We have had several earthquakes in these past couple of days. Today we had two (6.6 and 6). Please pray for us all in PR as we deal with the aftermath of the last earthquakes and try to keep calm.

We heard in the news that the south side of the island should be expecting more aftershocks similar or stronger than the previous for a few days. As you can imagine, there is no power. The systems are too weak and the biggest power plants are the ones more affected by the aftershocks we are experiencing.

For the grace of God we, the Church Arroyo, are well, just a little shaken up. Thank you in advance, as we are confident we will be in your prayers.

I’ve been in contact with Bradney Lopez this morning and have learned that he and his family are safe. Their home and Arroyo itself do not appear to be physically affected by the earthquake or by any resultant tsunami off the southern coast. While they are still without power, the Internet just came back on.

He had been in touch with Carlos minutes after the quake; their call was was cut off. He does not know about San Sebastian; he reports that the epicenter was near there.

From Sabrina Layana in Arroyo, Puerto Rico on January 10:

God bless you all. We are well! For now, the Church of Arroyo has power and water, though we expect blackouts. The island is only working mostly on one power plant. The North and the Southeast of the island hardly feels what the people from the Southwest are feeling. The seismic activity is nonstop! For now, the magnitudes range in between 2 and 4.6 MANY times a day. In our home we have an earthquake detector and when they have had earthquakes of 3+ it detects it. It makes me skip few heart beats when we hear the alarm. Can you imagine how does it feel to have the earth constantly shaking under your feet?! Houses, buildings, schools get weaker each time (if not already destroyed) and people are scared to be under roofs. They prefer to camp outside, and they don’t have water or power (Much of the island doesn’t) Please pray for the whole island! For those in the Southwest can rest and find refuge in the Lord and that the Lord would give the rest of us the wanting and the doing and be courageous to help our fellow Puerto Ricans in this time of need.