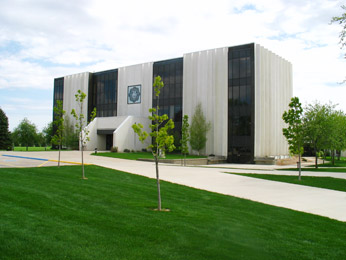 The Seventy-fourth General Assembly is meeting at Dordt College, Sioux Center, Iowa, beginning at 7:00 p.m., Wednesday June 13, 2007, with a terminus no later than noon, Wednesday June 20, 2007. This running daily report is being written by David K. Thompson and edited by Stephen Pribble. Refresh your browser to see the latest version (choose View, Refresh or View, Reload page). Questions or comments may be addressed to the Rev. Donald J. Duff, stated clerk.

The weather that greeted us upon arrival at Dordt College in Sioux Center was not Iowa's best. A steady downpour caught travelers off guard. For some, this meant having to move quickly from building to building without umbrellas; for others, it meant delayed flights and slow commutes from the closest airports in Sioux Falls, South Dakota or Omaha, Nebraska.

But in spite of the weather, many were still able to attend this year's pre-assembly conference, themed around helping commissioners understand and appreciate the importance of parliamentary procedure for bodies like the assembly. The Rev. Alan Strange delivered the keynote address. We Presbyterians are very concerned about doing things the right way, especially when it comes to general assembly. But we order our meetings not because we are mandated to do things "decently and in order," but instead so that we may properly esteem one another. "Decently and in order" is our standard for worship; though a vital mandate for the worship context, it is not normative for other contexts. Instead, our guiding principle must be the respect and love that we are commanded to provide for our brothers in the Lord. A rule framework (like Robert's Rules of Order, upon which we rely) enables us to safeguard this principle.

The rain continued, as did a steady flow of commissioners, corresponding members, and fraternal delegates. By the time the gavel fell at just after 7:00 p.m., approximately 121 of the approximately 138 commissioners expected had arrived. It was then that the dreariness of the rainclouds truly began to subside. The opening prayer, the first hymn, the sermon from the Rev. Dick Gerber—together these refrains pointed those gathered to heaven.

The goodly land I see, with peace and plenty bless'd;
A land of sacred liberty, and endless rest.
There milk and honey flow, and oil and wine abound,
And trees of life forever grow with mercy crowned.

Using Luke 15 as his text, Mr. Gerber reminded us that the three parables found here are our Lord's response to the scoffing Pharisees and Scribes, who grumbled as Jesus met with the tax collectors and sinners had gathered to hear him. In each parable, something is lost: a sheep, a coin, a son. And when that which was lost is found, there is rejoicing. The shepherd calls his friends and neighbors. The woman calls her friends and neighbors: "rejoice with me, for I found that which was lost." Likewise the father calls to his servants to bring the best and kill the fatted calf. There was to be a celebration. To remove doubt as to the meaning of these parables, Jesus applies them for us. The sheep? "I tell you that in the same way, there will be more joy in heaven over one sinner who repents than over ninety-nine righteous persons who need no repentance" (v. 7). The coin? "In the same way, I tell you, there is joy in the presence of the angels of God over one sinner who repents" (v. 10). And while Christ provides no explicit application with the last parable, the story of the prodigal son points us to the heavenly Father—a Father who watched his children reject him—but that Father calls the church to rejoice over the sinner that repents. Indeed, here we see God's heart and God's attitude. He sent his Son to seek and to save that which was lost. With the realization of this purpose he rejoices, and he calls us to rejoice with him and to share his joy. God says to us, "I have given my Son; together we've sent our Spirit, and he enables you to rejoice over those that are found." Gerber's concluding prayer placed a poignant exclamation mark on what should be our attitude: "We are humbled that you rejoiced over each one of us."

This year, as last, the assembly started regular business in earnest immediately after the sermon. The first order of business was to elect this year's moderator. As two very able men were nominated, a vote was necessary. While there have been and will be many elections at OPC assemblies, this one was something of a watershed, as we experienced the wonders of modern technology. For the first time, the assembly completed a vote using electronic voting devices. Each commissioner received a small credit card sized device, much like a small remote control, but without a channel selector, volume control or, a mute button. Upon instruction, we each pressed the button corresponding to the candidate we desired, and the votes were automatically tallied and displayed on the screen within seconds. The result? The Rev. Robert Y. Eckhardt (pastor of Redeemer OPC in Dayton, Ohio and current moderator of the Presbytery of Ohio) was elected. As he took the gavel from Mr. Gerber, he thanked the assembly and noted the significance of the venue. He was especially grateful for the opportunity to serve the assembly at Dordt. He had siblings attend the school, and one—his brother Doug, who passed away 10 years ago—had his memorial service in the very chapel in which we are meeting.

After the gavel passed, a few remaining items of business were conducted before the assembly adjourned for the evening. First, the remaining agenda was approved, and second, we agreed upon advisory committee assignments. It is these committees that will occupy the assembly for the next day.

Thursday is Advisory Committee (AC) day. For the vast majority of commissioners, this means intense focus on a smaller set of issues in smaller groups. It also means that there is little activity on the floor of the assembly.

AC duties began promptly at 8:30. I cannot report on the work of all committees, as I was only involved in two. I was assigned to AC 1, which is charged with reviewing the work of the Committee on Foreign Missions (CFM). It is always a joy to hear of God's work in his people around the world, especially when we can with confidence know the he has raised up for himself men dedicated to Gospel proclamation. AC 1 met with Mark Bube (General Secretary of the CFM), Doug Clawson (Associate General Secretary), and CFM representatives Gary Davenport and Paul Browne. We also had the added blessing of hearing directly from Bob Wright, a deacon currently serving in Uganda, helping not only the missionary families with the very practical needs, but also teaching the indigenous population agricultural and carpentry skills. Bob's enthusiasm for the work is contagious, and hearing him we could not help but get excited about the good things that God is doing through Orthodox Presbyterian efforts.

I also had the duty to sit on the other side of the table for AC 7, which reviews the labors of the denomination's historian (John Muether) and the work of the Committee for the Historian. Together with fellow committee member Brent Ferry, Mr. Muether and I met with AC 7 for a short time and reviewed not only our efforts since the last assembly, but also projects which are currently underway or planned in the near future. Of note is our recent publication, The God-Breathed Scriptures, released in celebration of the centennial of E. J. Young's birth. The short book contains a recently-rediscovered series of four lectures that Young delivered in 1966 on the doctrine of Scripture. Each commissioner will receive a free copy!

The assembly convened as a whole only once today, at 11:55, for our daily devotional. The Rev. S. Scott Willet read from Revelation 21:1-3, and engaged us with the challenge to embrace a genuine love for Christ's church: "If there is only one thing that I want to be known for," opened Mr. Willet, "it is this: that my ministry has brought about a genuine love for the family of God, the church." It is the church that is the body of the redeemed, and it is through the church that we get a glimpse of the eternal blessings that will be ours through our union with Christ. The language of John in the text paints a very poignant portrait for us: the church, that is, "the holy city, the new Jerusalem," is described as "a bride adorned for her husband." The bride does not adorn herself for herself, but instead for her husband, to please the bridegroom and to bring him honor. So too, we, the church, the bride of Christ, must adorn ourselves for our bridegroom and delight ourselves in his glory.

At the conclusion of the devotional, the assembly dispersed back to AC chambers for the remainder of the day. Some AC members finished their work early and had the opportunity to spend additional time fellowshipping with old friends and brothers from around the country. Others continued to work through the evening. All, however, completed the day knowing the importance of faithful attention to AC duties, as the labors of today will, hopefully, make more efficient the work of the assembly for the remainder of the week. David K. Thompson is a ruling elder at Immanuel OPC in Oakdale, Pennsylvania and a member of the Committee for the Historian.