For or against Calvinism?

Zondervan has published two books of the same length and price, one against Calvinism and one for Calvinism. Against Calvinism was written by the Arminian theologian Roger E. Olson. For Calvinism was written by Michael Horton of Westminster Seminary California. The cover of Olson’s book is red with three dead tulips; Horton’s cover is green with three living tulips. Each author wrote the foreword for the other’s book, communicating mutual respect.

Nevertheless, each book is independent, in that they do not reference arguments back and forth as in a debate. If you buy only one of the two books, you can fully enjoy that book without need of the other. But one can’t help wanting to read both, because they are set up in opposition, one trying to build up Calvinism and the other trying to destroy it.

The occasion for Olson’s book is the rise of five-point Calvinism (TULIP) among young Christians. He is irritated that many of his “best and brightest theological students were gravitating toward Calvinism” (p. 15) under the influence of Pastor John Piper. Olson and other faculty at Truett Seminary refer to them as “Piper Cubs.”

Olson’s critique of TULIP is restricted to the doctrines of unconditional election, limited atonement, and irresistible grace. He replaces them, respectively, with the doctrines of divine self-limitation (that God limits his sovereignty over creation to make room for man’s free will), unlimited atonement (that Jesus’ death makes forgiveness possible for all people), and prevenient grace (that God enables all people to believe in Christ equally).

Olson’s main concern is that the Calvinist doctrine of God’s decree—that God unconditionally foreordained everything that happens—implies that he is the author of sin and thus a moral monster. In other words, Olson argues against God’s decree on the basis of the problem of evil.

The book reads more like an opinion piece than a theological polemic. It is filled with illustrations, analogies, and accounts of personal encounters with abrasive Calvinists, but it is light on biblical exegesis. Olson seems to think that just stating the Calvinistic position is the best argument against it. He even indicates that he would not believe in God’s decree even if the Bible did teach it! His book is marred by too many references to later chapters of the book, like someone saying, “I’ll explain this later ... and I’ll explain that later too.”

Regarding the problem of evil, the Calvinist says that God decreed crimes against children, which Olson thinks is horrible. Olson’s doctrine of divine self-limitation says that God limits his sovereignty to allow criminals freedom to hurt children. How is that any better? Is a criminal’s freedom more valuable to God than a child’s safety? Olson, in arguing against Calvinism, has unwittingly argued against Christianity broadly considered. Atheists commonly use that argument against Christianity. For Olson to pick that argument up and apply it to Calvinism alone, when Arminianism is also vulnerable to it, suggests that he has not given enough consideration to the consequences of his own theological system. In other words, if Olson’s argument wins, then both Calvinism and Arminianism stand defeated. He uses a Kamikaze argument, seemingly unaware.

As for Olson’s theory of God’s self-limitation, God cannot limit himself. God is limitless in all his attributes. To suggest that God limits his sovereignty is like saying that God can limit his truthfulness, or his holiness, or his infinity, or his eternity, or his love, or his immutability. Olson essentially suggests that God changes his own being in order to make room for man’s autonomous free will. 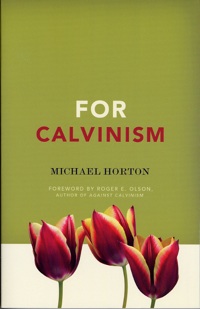 Horton’s defense of Calvinism was a pleasure to read. You may think you don’t need to read it because you already agree with Calvinism, but don’t dismiss this book if you want a contemporary defense of confessional Reformed theology against detractors.

There are eight chapters. Chapter 1, “The Essence of Calvinism,” looks at Calvinism from a historical-theological perspective. Horton argues for a catholic, evangelical, consistent monergism of five points and solas. But he also argues against the assumption that God’s sovereignty is Calvinism’s “central dogma,” from which all other doctrines are logically deduced. This exemplifies how Horton presents basic theological material and more advanced concepts at the same time. There is a nice complexity to the book in that respect.

In chapter 2, Horton stresses that Reformed anthropology begins before the Fall, with man’s nature in the state of innocence. Consistent with this conviction, he addresses concupiscence, total depravity, free will, the distinction between natural and moral ability, the sense of God, God’s decree in relation to sin, the gospel, etc. But again, Horton takes basic concepts like total depravity and relates them to an advanced concept, in this case Adam’s state of innocence.

In chapter 3, Horton gives an infralapsarian explanation and biblical defense of unconditional election. He discusses reprobation, the Reformed understanding of God’s permissive decree, foreknowledge, corporate election, double agency, the implications of the Creator-creature distinction for the free will of God and man (an advanced point, particularly well made), assurance, and the mystery of it all.