For Pastors: Five Stones to Fight the Good Fight

We are oblivious to reality if we do not accept that this is an age of increasing opposition to the Christian faith and to those who seek to live out of that faith in all that they do. We live in a time much like that of the Philistine opposition to Israel in the days of Saul (1 Sam. 17). Modern Philistines and modern Goliaths defy the ranks of the Israel of God, the church (v. 10). In reality, they are defying the living God and his armies (vv. 36, 45). Like Israel of old, the hearts of God’s people today are dismayed and greatly afraid (v. 11).

While we rejoice that David’s greater Son, the Lord Jesus, now leads and fights for his people as the ascended King, we must also accept that we are part of his army in the world, and that we, too, must take our places in standing against the modern enemies of God. Pastors lead that army. They are called to represent Christ, to minister him, and to “fight the good fight of the faith” (1 Tim. 6:12) in his name. They must lead God’s people by putting on the whole armor of God (Eph. 6:10–20), but they learn what that armor is and how to wear it as they learn from seasoned, faithful pastors who have been on the battlefield and not become casualties of the war. Unlike Saul’s armor (1 Sam. 17:39)—the pronouncements and directions of men who have had little or no experience (or failure in) the pastorate—theirs is tested and found to be good. Their writings are like the smooth stones David pulled out of the brook to equip him for his battle.

I have chosen five books for pastors to use like David’s stones. The material of these stones has been made smooth in the rough waters of pastoral experience. There are many other such stones that pastors could choose, but I have picked these because each one offers distinctive help to pastors on today’s battlefield.

The first smooth stone is Encouragement for Today’s Pastors, by Joel R. Beeke and Terry D. Slachter (Reformation Heritage Books, 2013). Subtitled Help from the Puritans, this rich little volume (written by a Reformed pastor and a man with over a quarter of a century of church parish service) is a treasure trove of history lessons and quotations from Puritan pastors. While the book would perhaps be better titled “Lessons from Yesterday’s Pastors,” it nevertheless gives wise words to today’s pastors on such subjects as zeal for the ministry of the Word, submission to God’s will, the calling of the shepherd, and the rewards promised to faithful service. I found the chapters on the dignity of the Christian ministry especially helpful, particularly the intriguing treatment of “Doing the Work of the Angels”—which opens up an area of biblical teaching that is too little considered in Reformed circles. 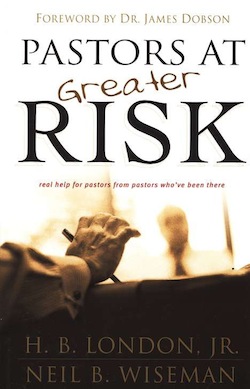 Pastors at Greater Risk, by H. B. London, Jr., and Neil B. Wiseman (Regal, 2003), the second smooth stone, is a production of Focus on the Family’s ministry outreach/pastoral ministries division. London is a fourth-generation minister and was a pastor for thirty-one years. Wiseman had twenty years of pastoral experience before serving for fifteen years as a professor of pastoral development. The pastoral sensitivity of the writers radiates throughout the book. While there are far too few references to the Scriptures in these pages, and while the concept of a plurality of elders in local church government would address many of the concerns raised in the book (e.g., “support groups” for pastors), the topics covered here as risks to a pastor’s family life and personal life make the book quite worthwhile. Wiseman’s personal words between the chapters are priceless. The book’s final chapter, “Twelve Steps to More Effective Ministry,” is excellent.

Smooth stone number three is On Being a Pastor, by Derek Prime and Alistair Begg (Moody Publishers, 2004). One of the many strengths of this outstanding volume is that it brings together the insights of a Scot (Prime) who has over thirty years of pastoral experience and an American (Begg) who has served at Parkside Church in suburban Cleveland, Ohio, for over thirty years. The whole range of pastoral life and ministry is touched on here: the call to the ministry, the pastor’s personal life, goals and priorities, prayer, devotional life, study, preaching, pastoral work, leadership of worship, leadership, delegation, family and leisure, and the rich concluding chapter on “Perils Tempered by Privileges.” I found the material on planning family vacations to be especially helpful.

You Lift Me Up, by Albert N. Martin (Mentor, 2013), is smooth stone number four. When a man has had such a greatly used Calvinistic preaching and pastoral ministry in one place over more than forty years (Trinity Baptist Church, Montville, N.J.), one should pay attention to the lessons he can teach those of us on the battlefield today. This volume is based on pastors’ conference messages in which he addressed the problem of ministerial backsliding and burnout. The chapters consist of ten warnings and five closing counsels. They offer a kind of diagnostic self-examination for pastors, coupled with passionate calls not to leave the disciplines and practices necessary for ministerial perseverance in any age. The two chapters on “Beware of Ministry with Neglect of Your Physical Body” are worth the price of the book.

The last stone, Time Bomb in the Church: Defusing Pastoral Burnout, by Daniel Spaite, M.D., with Debbie Salter Goodwin (Beacon Hill Press of Kansas City, 1999), was recommended to me by a pastor who, because of his intensity, frequently hovers on the borders of pastoral burnout. This book has the great benefit of bringing a medical doctor’s training and experience to bear on the increasingly prevalent incidences of burnout in the ministry. Spaite’s father was a pastor, so he is aware of the unique pressures facing pastors. Goodwin is the wife of a pastor, and she brings out into the open many of the otherwise unspoken challenges that beset a pastor and his family. The book’s encouragement of sabbaticals for pastors is among the many things that make this an insightful contribution.

So, pastors, take these stones (and others you may gather), and use them in your daily battles. God may use them as the means to give you victory over the modern Goliaths that have inflicted so much harm in the ranks of those in the Christian ministry in this perilous age.

The author is the pastor of Orthodox Presbyterian Church in Franklin Square, N.Y.