"Not a Visible Society": Charles Hodge 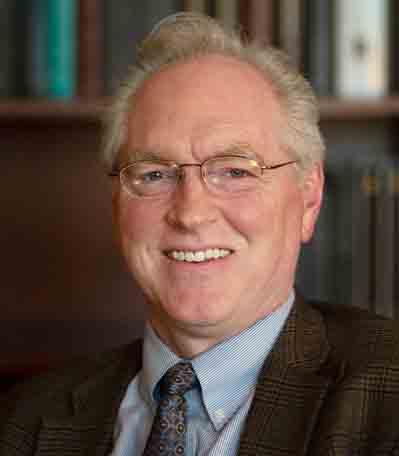 Every winter, James Bannerman taught the doctrine of the church to the fourth-year students at New College in Edinburgh, Scotland—the divinity school for the Free Church of Scotland. As the last lecture of the course came to its end, one can picture the grey-whiskered Scottish professor gathering up his papers, looking up to his waiting students, and dismissing them with the closing verses of Psalm 122:

This passage conveys the heartfelt conviction of a churchman who wanted his students to linger over the Word of God in their future ministries in which they would guard “the peace of Jerusalem” and seek its good. Few Presbyterian scholars have done more to explain such biblical ideals, as well as the fundamental principles of church polity and power, than James Bannerman.

This esteemed Scot was born in 1807 in Cargill, Perthshire. He began by studying the arts at Edinburgh University but eventually turned to theology. In 1833, he was ordained by the Church of Scotland as the minister at Ormiston (near Edinburgh). He was appointed Professor of Apologetics and Pastoral Theology at New College, Edinburgh, in 1849—a position he held until his death in 1868. Bannerman wrote several books and published several pamphlets on the issues of his day. He collaborated with James Buchanan in editing four volumes of William Cunningham’s writings.

Bannerman played a significant role in the birth of the Free Church of Scotland, beginning with the Ten Years’ Conflict which led up to the Disruption in 1843. The Disruption in the (Established) Church of Scotland was largely a conflict between two general parties: an evangelical party that wanted to assert the spiritual independence of the church and the rival party that was content with the church’s relationship to the civil power. The conflict came to a head when the parishioners of the church at Auchterarder in Perthshire unanimously rejected the patron’s selected candidate. This eventually pitted the presbytery (which backed the parishioners) against the Court of Session (which backed the rejected candidate), particularly when the Court of Session went so far as to declare the church to be a creation of the state. This directly challenged the church’s confession of faith and the church’s status as a spiritually independent and sovereign community, ruled by her own officers and courts. The general assembly protested the matter to an unsympathetic parliament and crown. In the end, the church was not willing to sacrifice the “crown rights of the Redeemer,” and more than four hundred and fifty ministers left the Church of Scotland to form the Free Church of Scotland in 1843. What was at stake was not just the spiritual independence of the church, but whether Jesus Christ was the head of his church. This principle, the headship of Christ, lies at the center of James Bannerman’s contribution to the Presbyterian doctrine of the church.

The Doctrine of Church Power

Bannerman’s legacy is connected to his book The Church of Christ, which was published posthumously by his son Douglas D. Bannerman. It is a superior, near-exhaustive exposition of Presbyterian polity with special sensitivity to the issue of church power. Bannerman formulates the doctrine of the church under three branches of what the church is called and empowered to do: doctrine, ordinances (worship), and discipline. This triadic view of church power aligns with the thought of Calvin,[2] as well as other Reformed thinkers like Francis Turretin, George Gillespie, and Louis Berkhof.

The Nature of Church Power: Spiritual

Bannerman defended the church as a “spiritual society” for several reasons. It is a divine institution that owes its origin to Christ. It is an outward, visible society that is formed upon the idea of the inward and spiritual one, which is animated, peculiarly, by the Holy Spirit. Lastly, the church’s spiritual means—the ordinances—match her spiritual ends, the spiritual good of man. These insights distinguish the church, institutionally, from the state. The church is unique in its origin, its essence, its objects, and its instrumentality. It is a kingdom altogether different from the kingdoms of the world and it represents “the grand and public lesson taught by God as to the fundamental distinction between things civil and things spiritual.”[3]

The Rule of Church Power: The Word of God

Bannerman was convinced that Scripture was the only and all-sufficient rule of duty and direction for the church. It reveals more than enough of the mind of Christ regarding the order and administration of his own house. With Scripture as her rule, the church does not have authority in herself to frame laws or edicts but has authority only to declare the laws or enactments previously laid down and revealed by Christ. In her use of the keys of the kingdom, the church must be content to read what Christ has “written” and declare what Christ has appointed for her in his Word. She simply has no power of legislation for herself, according to her own discretion. She would no sooner add to his laws than she would add to his book. Similarly, her officers are not regarded or received for having any intrinsic authority, but rather for their faithful declaration and application of Scripture. They are not masters, but servants who carry out the will of the king.

The Limits of Church Power: Doctrine, Worship, and Government

Bannerman applied the sufficiency of Scripture over the whole of the church’s vocation; that is, her doctrine, worship, and government. The Bible provides the foundation for what the church ought to do, and it also sets limits on how she goes about doing it. In other words, the lawful use of church power pertains not only to what Scripture commands and prohibits for doctrine, but also to what Scripture commands and prohibits for worship and order. Faithfulness to Christ means doing his righteous work, righteously.

The Source of Church Power: The Headship of Christ

Like his Scottish forefathers and contemporaries, Bannerman viewed the doctrine of Christ’s headship as crucial for understanding the source of church power. All questions regarding the church’s spiritual jurisdiction, her dispensing grace to her members, and her administering Word, ordinance, and discipline—all come back to the source, the ever-present and ever-living head, Jesus Christ.

In affirming Christ’s headship over the church, Bannerman distinguished between Christ as head in his “founding” capacity and in his “presiding” capacity. The former points to the power given to the church at her inception, while the latter points to the power she exercises now as the instrument of Christ’s present rule. This is nothing less than honoring Christ’s words: “apart from me you can do nothing” (John 15:5). The source of all that she is and all she does is found in her head.

This checks the church’s ambition, and it humbles her to affirm again and again that she is not only established by Christ, but she is also continuously superintended and empowered by Christ her head. His singular headship is not a communicable attribute.

Bannerman’s affectionate hope was that he had equipped his students to stand upon the biblical principles that would guide their thinking and conduct. His exposition of church power should similarly direct us. Christ is head of his body. Christ is presently building his church, by his Word and Spirit. Let us bow to his rule and means, even as we look to his power and grace as the source of all we do. After all, his is the kingdom, and the power and the glory, forever. Amen.

[1] This imaginary scene is actually not unlikely. These verses from Psalm 122 are the last words of Bannerman’s The Church of Christ, which is composed of his lectures, with hardly any editing. See editor’s preface in Bannerman, The Church of Christ (Banner of Truth Trust, 2015), xvii.

The author is an OP minister and professor at Westminster Seminary California. New Horizons, October 2021.

"Not a Visible Society": Charles Hodge