The Question of God 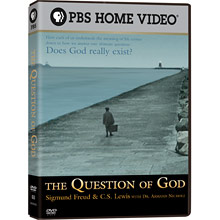 The Question of God

The Question of God, a PBS TV show. Reviewed by Eric H. Sigward, a member of Franklin Square (N.Y.) OPC.

The two-hour PBS show The Question of God presents the worldviews of Sigmund Freud and C. S. Lewis. Lewis is the perfect foil for Freud's avowed anti-theism. A battle of the intellectual titans ensues.

The show begins with a forum, chaired by psychiatrist Armand Nicholi. He introduces a subject. Then a video segment rolls. Actors in authentic sets bring the two intellectual giants to life. "Lewis" and "Freud" air their views and sometimes argue, and sometimes others give commentary. Then Dr. Nicholi presides over a colloquy. Nine cycles of videos and conversations address these topics: "A Transcendent Experience," "Science or Revelation?" "The Exalted Father," "Why Believe?" "Miracles," "Love Thy Neighbor," "The Human Condition," "Moral Law," and "Suffering and Death."

For Dr. Nicholi, as with Lewis, there is a continuum of the natural man and the spiritual man. The two are joined in the same pursuit. It is decision itself that makes man man, and there is no Adam, no fall, and no guilt before the objective standard of God's Word. Cornelius Van Til has made short work of this muddle, sorting out the Christian, less Christian, and non-Christian differences in metaphysics, epistemology, and ethics.

This elaborate presentation is impressive, but it lacks a critical focus on either Freud or Lewis, and it ends with Dr. Nicholi's flat statement that man chooses his own destiny.