Election & Free Will: God's Gracious Choice and Our Responsibility 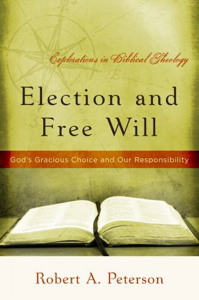 Election & Free Will: God's Gracious Choice and Our Responsibility

This is the first book in the Explorations in Biblical Theology series, edited by Robert A. Peterson, professor of systematic theology at Covenant Seminary in St. Louis. Aimed at college and seminary-level readers, it is a clear, helpful, and consistently Reformed treatment of election and free will. While election is unsettling to some, Peterson writes with the conviction that the doctrine is a comfort to believers and a powerful message in the face of the insecurity of modern life (p. 10).

Peterson begins by giving three practical reasons for writing the book. Next he reviews election and free will in church history, accenting the traditional Calvinist-Arminian divide. He then covers election in the Old Testament, the Gospels and Acts, the General Epistles and Revelation, and Paul (in two chapters). Another chapter discusses free will. Peterson concludes the book by anticipating and responding to objections to the Calvinist view of election. Study questions are found in the back. A brief bibliography, divided into Calvinist and Arminian sources, is also included.

As the book unfolds, Peterson clarifies several issues. First, throughout Scripture corporate election and individual election are never presented as mutually exclusive, but both are always upheld. Second, election involves God setting people apart for salvation and for service, never merely one or the other. Third, election is based upon the free will and grace of God, not upon foreseen faith. In the Old Testament, each of these is seen in the election of Abraham and Israel, and in the New Testament they are seen in the union between Christ and believers. Peterson also helpfully distinguishes the Calvinist view of divine sovereignty from fatalism, noting that fatalism is impersonal and irrational, while Calvinists believe that God is personal, rational, and faithful to his promises (p. 148).

One minor caveat: not everyone will agree with his view of Romans 11:26, where he understands “all Israel” to refer to ethnic Israel, not to the church as spiritual Israel (pp. 59, 171). This passage should he interpreted in light of Romans 9:6 (“not all who are descended from Israel belong to Israel”). Further, while Peterson footnotes Reformed thinkers who agree with his interpretation, he neglects to mention Reformed scholars who see a reference to the whole people of God (cf. p. 89, note 5, and p. 91). His distinction between an ethnic Israel with whom God is not finished and a national Israel with whom God may or may not he finished is unconvincing (p. 90).

Overall, this is a well-written book on a topic that can be thorny for both theological and pastoral reasons. As Peterson traces election through Scripture, he maintains the biblical emphasis on both divine sovereignty and human responsibility, rejecting attempts to remove the tension by emphasizing one or the other which he says are both rationalistic and unbiblical (p. 152). For those looking to improve their grasp of an important doctrine woven throughout Scripture, this book is recommended.