The Reformation: How a Monk and a Mallet Changed the World 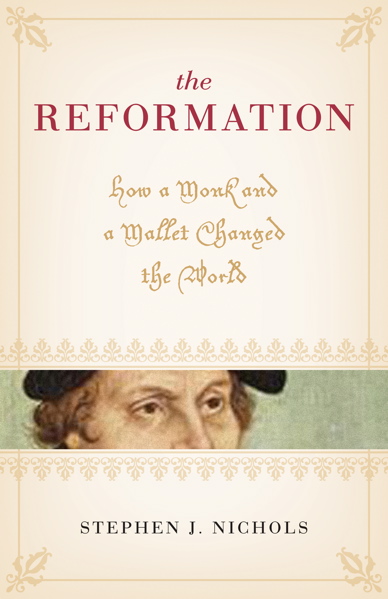 The Reformation: How a Monk and a Mallet Changed the World

The Reformation: How a Monk and a Mallet Changed the World, by Stephen J. Nichols. Published by Crossway Books, 2007. Paperback, 160 pages, list price $12.99. Reviewed by David Thompson, elder at Immanuel OPC in West Allegheny, Pa.

The name Stephen Nichols should not be unfamiliar to readers of New Horizons. In the last decade, he has published numerous titles on a variety of subjects. Perhaps his most notable books are his popular biographies presented as "guided tours to the life and thought" of noteworthy figures in church history, including J. Gresham Machen. One of his latest books, however, focuses not on a single individual, but instead on the movement that is, in many ways, at the center of our ecclesiastical life. In The Reformation: How a Monk and a Mallet Changed the World, Nichols offers an accessible survey of the entire Reformation landscape.

As the title indicates, the events of 1517 play a prominent role in the story as Nichols retells it. But he quickly moves beyond Luther and Wittenberg, taking the reader to Zurich with Zwingli, to Geneva with Calvin, and to England with King Henry VIII and the original "men in black," the Puritans. He even gives us a chapter on the women of the Reformation, highlighting the role they played, both as supporters (Martin Luther's wife, Katherina) and as leaders (the "woman in black," Anne Bradstreet). Nichols's wittiness makes this journey a pleasure. He is just plain fun to read.

But more than merely an entertaining ride through the sixteenth and seventeenth centuries, The Reformation is a timely, helpful book. It was not too long ago that some rather prominent evangelical historians asked aloud, "Is the Reformation over?" Nichols asks the question in a different way: "Do we still need the Reformation?" He answers clearly for us by saying that we absolutely do. In the history of Christianity, attempt after attempt to set the church back on the right course proved futile. But where earlier movements failed in the centuries leading up to 1517, "the Reformation succeeded." Why? Because "the Reformation got to the heart of the matter: right theology. The Reformers rightly diagnosed the disease, and they rightly administered the necessary cure." Nichols gets it right, and his book offers us a refreshing, entertaining appraisal of the reasons why we, as a church, should continue to care about, not just the German monk and his hammer, but the entire movement that he started.