Why Johnny Can't Preach: The Media Have Shaped the Messengers 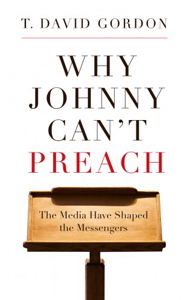 Why Johnny Can't Preach: The Media Have Shaped the Messengers

When I was in seminary, a fellow student earnestly wanted to be a preacher, yet he had a speech defect so severe that it was tough to understand a thing he said. I wondered, did not this handicap militate against his being able to preach effectively? In his challenging book, Why Johnny Can't Preach, T. David Gordon argues that preachers in our day are handicapped in ways that are so common that they don't even know that they are impaired.

Gordon, a professor at Grove City College and a PCA minister, wrote this book when it seemed that he might die of cancer. He wanted to make the contribution that he sensed he most needed to make while he could. Accordingly, Why Johnny Can't Preach is both heartfelt and terse; it doesn't take long to read. It is also a pleasure to read. Yet it is as powerful as it is pithy; those pleasing turns of phrase convey discomforting content.

Gordon avers that most preaching in our churches is worse than mediocre. Ordinarily, after a sermon, the average Christian family should at least be able to answer these questions: (1) What was the point of the sermon? (2) Did that point flow clearly from the Scripture text? (3) Did the applications follow from that point? (p. 19). Alas, most can't. The main reason for that, Gordon argues in chapter 1, is that "Johnny can't preach." Why not?

The usual suspect is poor seminary education, but Gordon maintains that the real problem lies elsewhere. "The problem is the condition of the typical ministerial candidate when he arrives at seminary" (p. 35). "The causes … are largely the cultural changes in the second half of the twentieth century" (p. 12).

Chapters 2 and 3 analyze these cultural shifts, with their deleterious influence on preaching. Chapter 4 discusses the content of good preaching, and chapter 5 offers suggestions toward "teaching Johnny to preach."

In footnotes, Gordon says that he hopes to write two sequels: Why Johnny Can't Sing Hymns (to analyze how these cultural changes have also affected worship) and Feed My Sheep (to give more thorough advice to preachers on how to counter the effects of modern media). If this book is any measure, then I earnestly hope that he follows through on both!