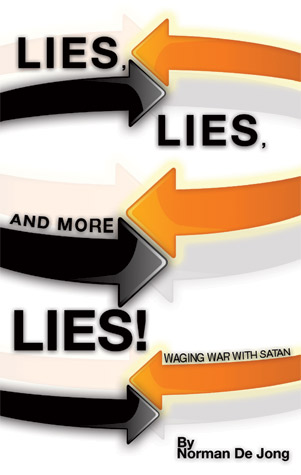 This book is divided into two parts. The first part deals with lies coming from pastors, teachers, and politicians, while the second part deals with giving our children a Christian education so they will be prepared to deal with these lies.

The back cover tells us that this book "is an effort to address ultimate questions of truth and falsehood in a biblical, comprehensive, antithetical and yet very practical way." The author has a deep concern for the truth and especially exhorts pastors to proclaim the truth. "We can pretend to live idyllic lives, carried to the skies on flowery beds of ease, or we can wake up to the reality of a world-wide war of deception and dishonesty" (p. ix). The author's desire is to deal with "devilish distortions in every conceivable setting" that he has experienced (p. ix). He directs comments sometimes to pastors and at other times to educators or parents.

In the first part, the author deals with "devilish distortions," which include differing ideas and differences in doctrine. In his chapter on lying (chapter 4, "Is Lying Ever Justified?"), he deals with the issue of people hiding Jews from the Nazis during World War II. He ends the chapter with this conclusion: "Lying is always sin, but it is a sin that can be forgiven." So is one to conclude that deception is okay as long as the goal is good?

The author provides many examples of "devilish deceptions" promoted by pastors, false religions, teachers, and politicians. But one wonders why certain "lies" were chosen and others were excluded. Pages 119–31 provide excellent material dealing with the deceptions of evolution and global warming.

The second part of the book concerns Christian education. Here the author is at his best. It is a gem. It deals more with the Christian school, but has much value for homeschoolers as well. "Making a godly difference in young people's lives is what makes teaching so rewarding" (p. 183). He makes this excellent observation: "Teachers should articulate for their students what it is that they want them to learn."