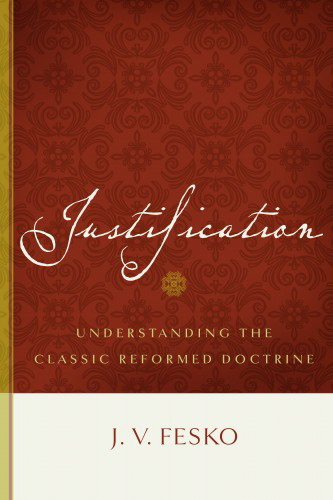 John Fesko, a minister in the OPC, was recently added to the faculty at Westminster Seminary California. He also contributed to the OPC's justification report. Justification is a work of exegetical, biblical, systematic, historical, and polemical theology. It relates the doctrine of justification to fifteen subjects: church history, prolegomena, redemptive history, the covenant of works, the work of Christ, historical context, faith alone, the New Perspective on Paul, imputation, union with Christ, sanctification, the final judgment, the church, Roman Catholicism, and Eastern Orthodoxy.

The book is well written and timely. It reflects a conscious effort to uphold and defend the biblical doctrine of justification, with an eye on the entire theological encyclopedia. That is, Fesko's approach is theologically holistic.

Regarding redemptive history, Fesko concludes that justification is historically "already," sanctification is "already" and "not yet," and glorification is "not yet." Justification is also eschatological, in that it is "the verdict of final judgment" brought into the present (p. 106).

Second, Fesko says that union undergirds the entire order of salvation (including justification), but then says that justification is the legal ground for union with Christ. Which is the ground of which? This confuses the reader.