The Family Tree of Reformed Biblical Theology: Geerhardus Vos and John Owen—Their Method of and Contributions to the Articulation of Redemptive History 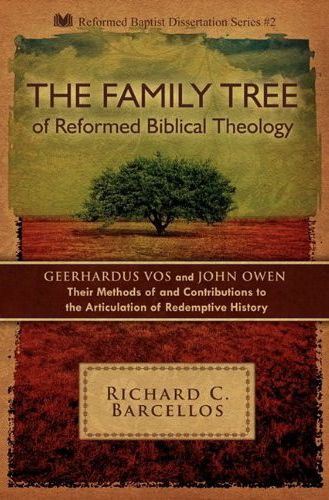 The Family Tree of Reformed Biblical Theology: Geerhardus Vos and John Owen—Their Method of and Contributions to the Articulation of Redemptive History

How novel is the Biblical Theology of Geerhardus Vos? In many respects, this question is what Richard C. Barcellos attempts to answer in The Family Tree. Students of both Vos and Owen will probably find much in this book to appreciate, as well as things with which to disagree.

Methodologically, Barcellos compares and contrasts the hermeneutical contributions of Geerhardus Vos and the Puritan theologian John Owen. He does this primarily by looking at two books, one from Vos and another from Owen, both of which are titled Biblical Theology (Owen's book was retitled this in a subsequent printing). Before getting into the comparison of the two books, Barcellos gives a helpful summary of the backdrop of both authors, as well as a short review of the history of biblical theology (as a movement). A number of insightful connections are made. While these sections are certainly helpful, those on Owen are more fully developed, and the section on Vos lacks reflection on his Dutch influences and contemporaries. There is no mention of Bavinck or Kuyper, for instance.

The book is laudable for showing a line of continuity between Vos and the Reformed tradition of covenant theology. For Barcellos, if Vos is to be called a "father" of biblical theology, Owen (among others) should be called a "grandfather." In this sense, Barcellos seeks to rescue Vos from the accusation of being novel. To sum up his view, "Vos did not invent or discover; he developed" (p. 261). Barcellos makes the unusual claim that "Owen was more explicitly Christocentric than Vos" (p. 260). Barcellos admits (in private conversation, used with permission) that such statements must be understood with respect to the two books he is comparing, not the cumulative works of each author. This is an important qualification, for otherwise some of the book's "concluding assertions" could easily be taken as sweeping generalizations about Vos and Owen. Overall, this book is a welcome addition to the discussion of biblical theology.