Politics According to the Bible 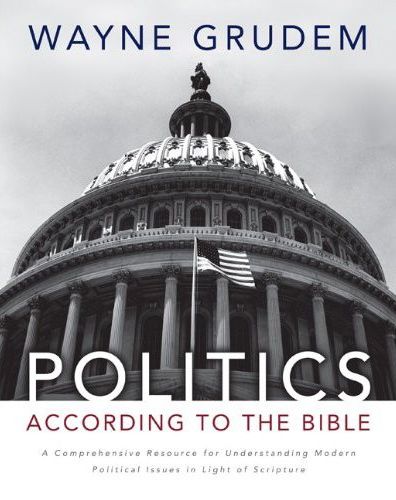 Politics According to the Bible

If you wonder how front-page news relates to the Christian faith, Wayne Grudem's Politics According to the Bible might be a good book for your nightstand. Grudem offers a gentle, albeit firm, admonition for Christians to embrace their responsibility to bring God's law to bear upon the culture in which they live.

Grudem offers a panoramic sketch of the many issues tearing America away from its foundational biblical values. The book is long, but the first four chapters (123 pages) contain his main arguments. These arguments address the irrationality of disenfranchising religious convictions from the political arena and the false dichotomy in the claim that Christians should "do evangelism, not politics."

God, according to Grudem, intended the Bible to give guidance to every area of life—including government and politics. He then offers an impressive historical résumé of how Christian influence has led to the outlawing of such atrocities as "infanticide, child abandonment, abortion in the Roman Empire, human sacrifice, pedophilia, polygamy, the burning alive of widows, etc."

Grudem adds that "passing good laws and having good government will never be enough to change a society." He recognizes the centrality of the cross of Christ as the answer to the human dilemma. However, the earth belongs to a God who knows best how it should be governed—and has revealed such information in Scripture. Grudem then devotes over 400 pages to applying Scripture to a wide range of issues.

The hotbed issues of abortion, euthanasia, capital punishment, and gay marriage are handled early and forcefully. Then there are brief, yet instructive opinions on pornography, school vouchers, private property, taxes, health care, the environment, national defense, the CIA, just war, foreign aid, cap and trade, affirmative action, public education, global warming, etc. Grudem has done his homework and handles these topics from an informed perspective. It's very educational, yet there are some concerns.

Grudem's blurring of the law and the gospel is disconcerting. "Preaching the 'whole Gospel,'" Grudem suggests, "must also include preaching what the Bible says about civil government." He doesn't maintain a strong law/gospel distinction. He writes of "a distinct realm of 'things that belong to God,'" implying that there are things outside that realm—a position unthinkable for a Christian, and one that Grudem elsewhere contradicts.

Whether Jesus is reigning or will reign is up for grabs from chapter to chapter, and although Grudem is refreshingly optimistic about the success of the gospel, his final pages suggest a future time of signs and wonders; clearly he is not a cessationist. He also denies the valid use of the Law of Moses as a model for God's standard of justice or general equity. For a book about politics and the Bible to jettison the books in the Bible that address the topic most specifically is disappointing.

Nonetheless, the book is very informative and a valuable resource to bring Christians up to speed on contemporary issues.