Did Adam and Eve Really Exist? Who They Were and Why You Should Care 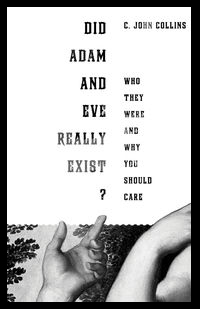 Did Adam and Eve Really Exist? Who They Were and Why You Should Care

Did Adam and Eve Really Exist? Who They Were and Why You Should Care, by C. John Collins. Published by Crossway, 2011. Paperback, 192 pages, list price $15.99. Reviewed by OP pastor Chad E. Bond.

C. John Collins has already published several studies on the interpretation of Genesis and the relationship between science and theology. His goal in this book is to demonstrate that the traditional understanding of Adam and Eve is worthy of our confidence and to show why it must be retained.

We know that Adam and Eve really did exist, because the Bible tells us so. But next time someone tells you he could never be a Christian because Genesis 1–3 poses a serious intellectual stumbling block, will you be prepared to make a defense? Next time someone attacks your belief in a literal Adam and Eve with sophisticated scientific counterclaims, will your confidence be shaken? Did Adam and Eve Really Exist? is a valuable resource for anyone interested in reflecting further upon this important subject.

Collins painstakingly expounds passages in Scripture that speak of Adam and Eve, demonstrating that the traditional understanding of our first parents is the view articulated or presupposed in Genesis, by Paul, and above all by Jesus in the Gospels. These texts require a historical Adam and Eve for their "truth value." Collins also shows how these texts are part of the overarching, worldview-shaping story of creation, fall, redemption, and consummation. It is necessary, Collins insists, to appreciate the way in which the traditional understanding of Adam and Eve is an "irremovable" part of the Bible, underlying and controlling the entire story line from Genesis to Revelation.

Collins goes on to show how the traditional understanding of Adam and Eve provides a meaningful explanation for everyday moral and religious experience (e.g., the recognition of human uniqueness and dignity, the sense that something is wrong with us, the yearning for justice, and the hunger for things to be better). The only satisfying explanation is the one given in the Bible, which enables believers to affirm and understand these intuitions.

Finally, how should we think about Genesis and science? What about current theories on the origin of the human race? Collins deals with these and related questions in chapter 5. His tone is tentative and latitudinarian. His proposed "bounds of sound thinking" are broad and inclusive. In the end, we are left with "many uncertainties." But these uncertainties, Collins reassures us, "in no way undermine our right to hold fast to the Biblical story line with full confidence."