Who Chose the Gospels? Probing the Great Gospel Conspiracy 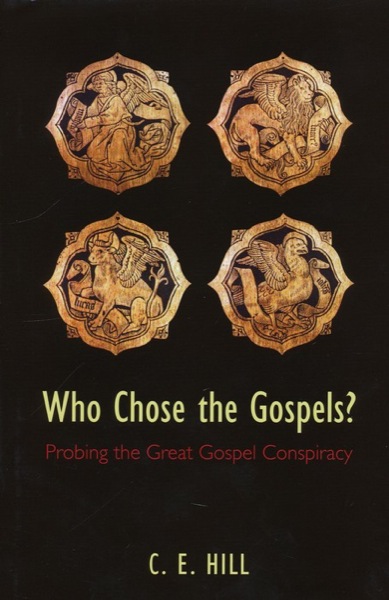 Who Chose the Gospels? Probing the Great Gospel Conspiracy

Professor Hill (of Reformed Seminary in Orlando) sets the record straight about the church's recognition of the four Gospels. He exposes the false views of the formation of the New Testament popularized by such men as Dan Brown and Bart Ehrman.

Hill begins by addressing Ehrman's argument that there was no orthodoxy before the fourth century. Hill notes that an excavated Egyptian garbage heap contained many early fragments of the Gospels. He wonders why orthodox documents wound up in the dump, if it was the Orthodox who were sinisterly suppressing the Gnostic writings (p. 23). This puts the kibosh on Dan Brown's conspiracy theory of the sneering, power-hungry bishops!

In chapters 2 and 3, Hill examines the writings of Irenaeus. His comments about the four Gospels show that they were already received in the early church (pp. 37–41).

Chapter 4 shows that Irenaeus is not alone in his witness. He is joined by Clement of Alexandria, among others. Some critics have brought Clement's testimony into question because he also cites noncanonical sources. Hill has much to say about this, but concludes by asking why this should call Clement's testimony into question. After all, preachers commonly cited extrabiblical sources.

What about the witnesses of the harmonies of the Gospels in the early church, such as Tatian's Diatessaron? Some scholars have tried to discredit this work, but Hill demonstrates in chapter 5 that there was a four-gospel canon standing behind it (p. 107).

Chapters 6 and 7 are well worth the read, but we will move on for the sake of space. In chapter 8, Hill studies three texts that date from before 150. While this evidence is less clear than that found in later sources, it does show that these writers were knowledgeable of the canonical four.

Chapter 9 examines the Apostolic Fathers' allusions to the New Testament. He concludes rather boldly: "The rightful location and transmission of religious authority which made the reception of the four Gospels … possible … was in place already in the late first century" (p. 204).

In chapter 10, Hill traces an endorsement of the Gospels from a very early source, written between 110 and 130. It mentions that the apostle John "received" the truth of the other three gospels. Hill concludes that "this would make the aged apostle John the earliest 'chooser,' endorser, or 'canonizer' of the four Gospels" (p. 224). Hill concludes that the Gospels "imposed" themselves on the church. That is, the church recognized the canon, rather than formed it. In other words, the Gospels are self-authenticating.

In conclusion, Hill has provided us with a well-researched work that provides a much better perspective on the evidence than that provided by skeptics. Has God really said? Charles Hill stands up and cries out aloud, not being ashamed of the Gospels, "Yes, God has really said!" This book comes highly recommended.