Radical: Taking Back Your Faith from the American Dream 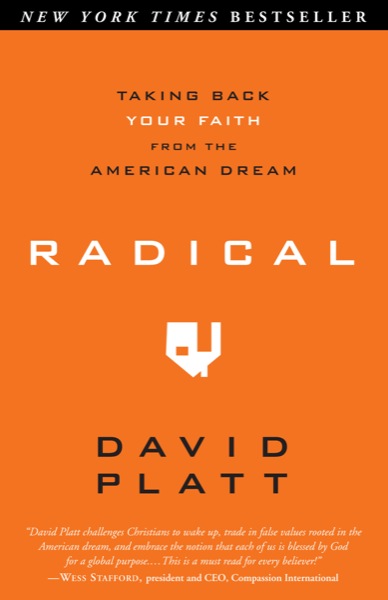 Radical: Taking Back Your Faith from the American Dream

This is essentially the question David Platt asks in his New York Times best seller, Radical: Taking Back Your Faith from the American Dream. Platt attempts to shake American Christians out of their generally superficial spirituality (built around a "nice, middle-class, American Jesus"), exposes the shallowness of worship and "programs" that characterizes so many churches, and helps his readers to realize that Christian living involves both service and suffering.

Platt also reminds us that there are millions overseas who suffer from oppression and poverty. He encourages readers to serve the destitute, both here and abroad.

However, while there is much to like in Radical, it suffers from three major problems. First, while Platt does use much Scripture, he is often guilty of eisegesis (reading into the text). For instance, he cites Christ's statement to "sell all that you have and give to the poor ... and come, follow me." But was Jesus calling all believers to do this, as Platt implies? Or was Christ challenging the rich young ruler in his particular circumstances? This possibility is not considered.

Further, in a book that so emphasizes helping the poor, one would expect exegesis of texts like 1 Timothy 5 and Galatians 6:10 (which emphasize that charity begins in the local church). There is none.

Second, the role of the church is largely ignored. There is no treatment of the diaconal ministry or of the church government's role in ordaining ministers. It is simply assumed that all Christians can decide for themselves whether to become evangelists or to perform works of mercy, without any elder oversight.

Third, there is much use of guilt. At one point, Platt makes Christians feel guilty for worshiping while so many poor people are left outside—never mind, apparently, that worship is a divine command. One is also left with the conclusion that true service only comes when one either moves overseas or goes to work in a soup kitchen. Surely God will call some to these mercy ministries, and yes, most Christians should serve more than they do. But why can't they also serve through their chosen vocations and in their local churches?

While Radical does much to shake American churches out of their slumber, it sadly falls short in too many places.