Between the Times: The Orthodox Presbyterian Church in Transition, 1945–1990 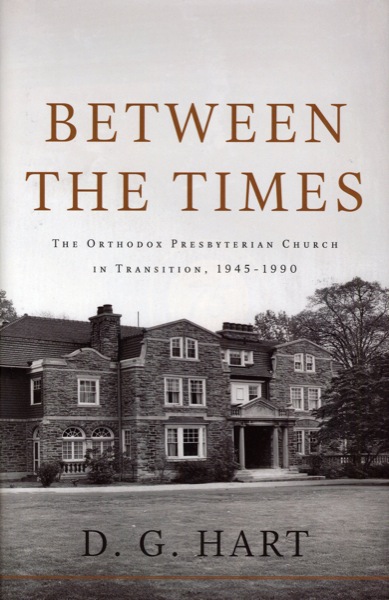 Between the Times: The Orthodox Presbyterian Church in Transition, 1945–1990

Hart is my favorite historian! How can you not love someone who learns of Machen from outside the OPC and then joins in fellowship and service with our cause.

This book is our story. It should be read by every teen and adult in the OPC. We need to know our history, so we can understand and appreciate our unique place in the American church scene.

The OPC is often plagued with people who would rather be elsewhere. Many pastors hear the refrain: "I prefer the PCA (or the CRC), but I put up with the OPC as the only current local option." Reading our history gives people a reason to stand solidly with the OPC testimony.

LeRoy Oliver gave me his personal copy of The Presbyterian Conflict by Edwin Rian. Reading that book and the Machen biography by Stonehouse, along with Tom Tyson's kind pastoral mentoring, brought me into the OPC.

Between the Times is dedicated to the memory of Charlie Dennison. Hart acknowledges how influential Charlie was during the period of time covered by this book, especially the decade of the 1980s. As OPC historian, Charlie built up the historical consciousness of the OPC while battling those who would end her testimony through merger with the PCA.

This reviewer lived through those years as a young pastor. Influenced by some who were ashamed of the word orthodox, and desiring to be flexible, I then favored joining the PCA. Charlie was a patient friend and mentor to me. As a result of his pastoral and literary labors, I became rooted and happy with my OPC lot. In 2002, I wrote in the preface to the second edition of Henry Coray's J. Gresham Machen: A Silhouette: "We are convinced that the work of the late Rev. Charles Dennison and the Committee for the Historian (beginning with books that commemorated the semicentennial of the Orthodox Presbyterian Church in 1986) provided exposure to our denomination that has resulted by God's grace in the tremendous growth in home missions over the past fifteen years. We believe that this popular biography of Dr. Machen by Rev. Coray will join those works in offering an answer to the important question, 'Why the OPC?' " As Hart reviews that era, you may experience a similar satisfaction in God's call to you to live and serve in the OPC—not as your second choice, but as your first choice.

There is much more in this volume than an account of the "Joining and Receiving" struggles. Between the Times is a topical, not a completely chronological, history. Topics discussed include Trinity Hymnal, Westminster Theological Seminary, and Great Commission Publications. The theme underlying each topic is the tie between our history and our identity. As we understand our story, we better appreciate our place in God's providence.

I highly recommend that this book be shared with seminarians and seekers, as well as with the people already sitting in the pews of our Orthodox Presbyterian congregations.

Click here for a review of Between the Times by Donald J. Duff.