The Meaning of Marriage 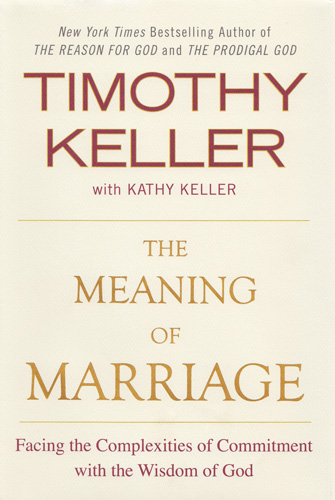 The Meaning of Marriage

This one is different. Keller's target audience profoundly influences his purpose. He writes to strengthen Christian marriages, but he is also an apologist for both marriage and the gospel to those in our skeptical, secular culture.

Keller combines reflection on biblical texts (in particular, Genesis 2 and Ephesians 5) with a critical assessment of recent shifts in our culture's view of human freedom and responsibility. He seeks to persuade a suspicious generation of the timelessness of God's word and the resilience of marriage.

Keller notes the shift in the way marriage has been viewed in modern culture. Traditionally, people found freedom in binding themselves to the duties of covenant marriage. A man became truly masculine through self-mastery, not self-indulgence. For the secularist, the goal of marriage has changed to self-actualization: finding personal, emotional, and sexual fulfillment. Marriages implode when two people—inside or outside the church—are in it for themselves.

In stark contrast to the world's view, Keller offers a radically Christian mission for marriage: "to teach us more about our sins in unique and profound ways and to grow us out of them through someone who speaks the truth in love." Such a view requires a strong, gracious Savior!

Marriage as companionship and friendship is preserved by the primary responsibility to submit to one another out of reverence to Christ (Eph. 5:21). As one abandons his or her self-interest to serve the other, one practices the hardest aspect of marriage, putting your mate's needs ahead of your own "intentionally and intensely." Headship, for Keller, does not negate the primary function of being each other's bondservant. Such servanthood would relieve many marriages of the heartache that accompanies a misappropriation of male headship and female submission.

This reviewer finds Keller's incisiveness bracing: self-centeredness is present in every marriage, and we often respond to our spouse's self-centeredness with our own self-centeredness. Stick by the commitment to act and serve in love, especially when you don't feel much delight! The cancer that corrupts marriage is insidious; the gospel cure is robust. Therein lies the joy and power of finding in our marriages the imitation of Christ's self-giving for his Bride.

Keller cites both biblical data and wise psychological and sociological observation in his discussion of singleness—a welcome addition to a Christian book on marriage. After giving biblical reasons for a Christian marrying only another Christian, he explains the terrible consequences of marrying an unbeliever. You lose transparency before your spouse concerning Christ and the gospel; you will talk about Jesus less, becoming inauthentic. You may even move Christ out of your conscious thoughts entirely.

Keller also argues against cohabiting before marriage on both biblical and surprising empirical grounds. Living together before marriage actually increases the likelihood of divorce, rather than helping you avoid it.

Keller's book is useful and provocative. This reviewer was drawn to examine his own selfishness and the glorious freedom of laying down his life for his partner, to which one is liberated by our Lord's grace and example.