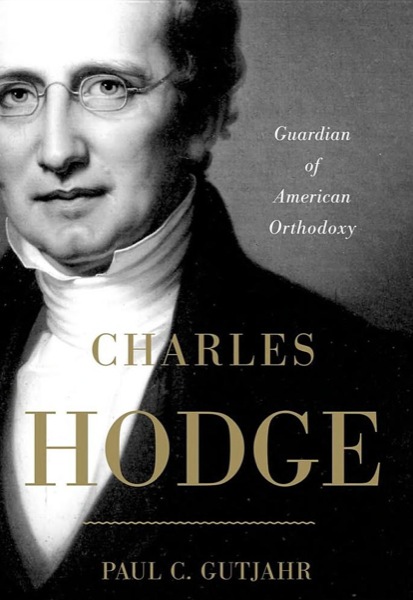 Paul Gutjahr has written a biography of Charles Hodge (1797–1878) that is fair and historically contextualized, showing Hodge's importance in his time and world. The book is well written, and its short chapters are easy to read. The biographer, however, does not fully understand his subject, as he is not a theologian in addition to a historian. As a minor illustration of this, he calls, at least twice, the forbidden fruit in Paradise an apple—a common misconception among those not well acquainted with the Bible. More significantly, Gutjahr is not clear on Hodge's position on the imputation of Adam's sin, the nature of penal substitution and the atonement, his doctrine of Scripture, and other biblical and theological matters.

These observations might prompt one to dismiss this work as shallow. That would be a mistake. Gutjahr has delved into the original sources, especially the Hodge papers at Princeton, and has come up with many gems. His work on Hodge's background, family, and historical context is good and at times insightful. He is as sympathetic as one might expect a historian to be who does not share Hodge's theological convictions. Given Hodge's importance, such a work as this is an important addition to what one can only hope is a burgeoning body of literature on the longtime professor at Princeton Seminary.

Gutjahr's work enjoys distance, both personally and chronologically, that A. A. Hodge's work on his father naturally could not possess. In this respect, he is judicious in his view of Hodge on the question of slavery, assessing him critically, but fairly. He is nuanced in his treatment of Hodge on politics and the Civil War. Gutjahr is also, rightly, critical of some of the deficiencies of Hodge's Scottish Common Sense Realism. While Gutjahr does not find Hodge to be in the thrall of this philosophical view to the degree that earlier scholars did, he does not seem to be as aware of the burgeoning body of literature that attests to Hodge's greater dependence on traditional Calvinism and acquits him of the charge of rationalism. There is a growing recognition that Hodge and his Princeton colleagues were never as captive to Scottish Realism as has been alleged, being more indebted to the classic Reformed faith in general and the Westminster Standards in particular.

Everyone interested in nineteenth-century American church history or Presbyterian history should read this work. Both the OPC and the PCA can claim Hodge as a forebear, particularly the "Northern" church. It was opined by some in his day that Thornwell was respected, Dabney feared, and Hodge loved. Gutjahr's fine biography will give its readers a good idea of why Charles Hodge was loved by family, students, and all who knew him, while at the same time being a churchman of great significance.