An Eye for Glory: The Civil War Chronicles of a Citizen Soldier 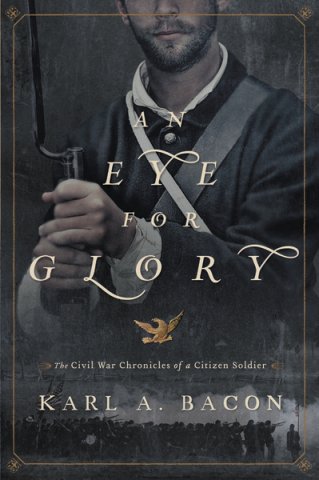 An Eye for Glory: The Civil War Chronicles of a Citizen Soldier

An Eye for Glory: The Civil War Chronicles of a Citizen Soldier, by Karl A. Bacon. Published by Zondervan, 2011. Paperback, 364 pages, list price $16.99. Reviewed by OP minister John W. Mallin.

An Eye for Glory is the first-person account of Michael Palmer, written twenty years after his 1862 enlistment in the 14th Connecticut Volunteer Infantry Regiment. The story is an account of his life of faith during the American Civil War.

The reader follows Michael through the boredom of encampments and the terror of battles, including Antietam Creek, Gettysburg, and Cold Harbor. The story covers his experience from his decision to enlist in August 1862 through his discharge in June 1864, with some background of his life before enlistment and two chapters about his life after the war. There are glimpses of the experience of his wife at home.

The novel is set forth in thirty-four chapters and an opening and a closing letter. In the opening letter, Michael presents the manuscript of his account to his children. In the closing letter, the typed manuscript is presented for publication by his daughter, almost one year after his death, on May 14, 1902, nearly twenty years after its writing. The chapters are titled and headed with Scripture quotations. The body of the account is interspersed with letters between Michael and his wife.

The title of the book points to a double meaning, with a view to the glory of man and the glory of God. So the novel works on at least two levels.

The style of the book reflects accurately the style in which a late nineteenth-century educated man would have written, based on journals and letters of the day. Historical details are accurate. The account contains detailed descriptions of people, surroundings, battles, camp life, and Michael's thoughts. The dialogue and comments realistically portray the speech and thoughts of a Christian of the period and place, and accurately reflect the experiences of a soldier and the common responses to such experiences.

As Christian fiction, this book is neither saccharine nor didactic in style, but natural in dialogue and comment from the point of view of a Christian encountering the events portrayed. Bacon understands the heart of man. He explores the stresses on the faith of a man in battle—on the Civil War battlefield and in his own heart. It is edifying.

The work is remarkably free of errors missed by proofreaders. It is pleasant in appearance and well bound. Maps enhance the work.