Are We Together? A Protestant Analyzes Roman Catholicism 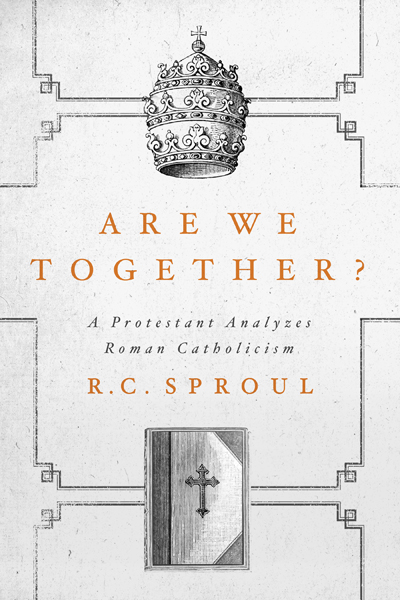 Are We Together? A Protestant Analyzes Roman Catholicism

In Are We Together? A Protestant Analyzes Roman Catholicism, R.C. Sproul argues that Roman Catholicism remains incompatible with Protestantism. Sproul uses the term Protestantism loosely, which can be confusing, especially since mainline Protestants have made strides to reconcile with Roman Catholicism through efforts such as Evangelicals and Catholics Together. Nevertheless, Sproul seeks to demonstrate that official Catholic teaching cannot be harmonized with the theology of the Protestant Reformers.

The doctrine of justification continues to be a major incongruity between these two theological traditions. Sproul carefully explains the importance of the imputed righteousness of Jesus Christ and how it is that believers' sins are forgiven. This teaching of justification by grace alone, received by faith alone, was the material cause of the Reformation, and it continues to separate conservative Protestants from Roman Catholicism.

Even so, the authority of Scripture is more basic, since it undergirds this doctrine of justification. Sproul notes that Catholic teaching on Scripture has developed since the Reformation, specifically through the influence of modernism and the theological climate of Vatican II. But these influences have not merely affected Scripture's authority; they reach also to the doctrine of the church. The Catholic Church of the sixteenth century was exclusive, but the contemporary Catholic Church has spread its wings to include people merely possessing an inward desire to please God.

Sproul extends his criticism to other subjects. In his chapter on the sacraments, he focuses on baptism and the Lord's Supper. He also devotes chapters to the Papacy and Mariology. Overall, his theological treatments are insightful and accessible to readers with a modest grasp of Reformed theology. It is apparent that Catholic doctrine has evolved. Still, profound differences persist and remain insurmountable barriers to ecumenical union.

While Sproul's assessment of official Catholic teaching is accurate as far as it goes, it does not penetrate to the underlying issue, when considered in light of post–Vatican II theology. Through a use of transcendental philosophy and a modified doctrine of revelation, many recent Catholic theologians affirm the magisterium's official teaching even as they make room for contemporary formulations. Sproul touches upon Vatican II, but does not identify this particularly pernicious feature. Modern Roman Catholicism is often a both-and proposition, in which apparently conflicting theologies can coexist. But this provides all the more reason why Sproul's fundamental concern is legitimate. We should not seek to reconcile with Rome. Indeed, for this very reason, the truths of the Reformation are perhaps more significant today than they were in the sixteenth century.

Sproul concludes that "we have no common cause in the gospel" (p. 121). He suggests that, as individuals, Protestants should reach out to their Roman Catholic neighbors, and pastors should preach the gospel, even demonstrating the theological errors of Catholicism when necessary. The Reformation is not over, and the "cause of sola Scriptura, sola fide, sola gratia, solus Christus, and soli Deo Gloria remains the cause of and for biblical truth" (p. 122).