Unity and Continuity in Covenantal Thought 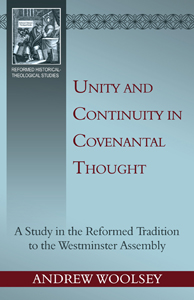 Unity and Continuity in Covenantal Thought

Woolsey's work on covenant theology is a study of the relationship between the early Reformers' view of covenant and that of English and Continental Puritans. Weighing in at 672 pages, it is not a short read, but I am delighted to say that in spite of its substance, it is not a difficult read. Woolsey is to be credited for making a somewhat scholastic issue accessible to pastors and interested laymen.

This book deals with the claim that English and Continental Puritan covenant theology bore little resemblance to that of the earlier Reformers. The critics have argued that later Reformed theologians misunderstood and thus misapplied Calvin's covenant theology. In particular, the Westminster Confession of Faith and its statements on covenant have been attacked as "a plague that had long infected the Reformed churches." It has been alleged of the Confession's covenantal statements that "Calvin knew nothing [of them], for these theological innovations were the work of his successors." The same commentator wrote, "It was Calvin who rescued me from the Calvinists." Is it the case that the English and Continental Puritans innovated when addressing covenant theology?

Woolsey sets out an extensive argument against this position, delineating so clearly the continuity and unity from Calvin to Westminster, that one wonders if the critics have actually read the source materials. This is not to say that the path from Calvin to Beza to Ursinus and Olevianus and to England with Cartwright, Fenner, and Perkins and to Scotland with Knox, Rollock, and Howie was monolithic. Woolsey readily discerns differences and development that one might expect with the passing of time. He does, however, ably demonstrate that the basic structure of covenant theology is indeed present from Calvin to the later Reformed theologians.

In Part One, Woolsey sets out the Westminster Assembly's view of covenant, citing many of their influences and sources. Part Two deals with the forerunners of covenant theology, from the church fathers to Luther and Bullinger. Part Three is a substantial treatment of Calvin's covenant theology, worthy of study in itself. In Part Four, Woolsey treats post-Reformation development—to Heidelberg, England, and Scotland, demonstrating that, in spite of development, the basic structure of covenant theology remained consistent from Calvin to the Calvinists. I commend Woolsey for his work and the accessible and unaffected manner of his writing, and Reformation Heritage Books for publishing it.