The Cross in the Shadow of the Crescent: An Informed Response to Islam's War with Christianity 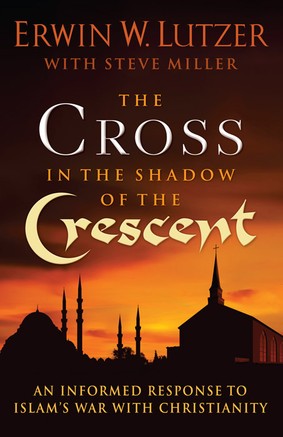 The Cross in the Shadow of the Crescent: An Informed Response to Islam's War with Christianity

The Cross in the Shadow of the Crescent: An Informed Response to Islam's War with Christianity, by Erwin W. Lutzer with Steve Miller. Published by Harvest House Publishers, 2013. Paperback, 253 pages, list price $14.99. Reviewed by OP minister Norman De Jong.

This is a highly acclaimed book coming from the pen of Moody Bible Church's senior pastor. Well it should be. I would rate this as one of the best analyses of Islam. It ought to be read by every pastor, Bible teacher, and church leader in America. Lutzer is unafraid of laying all of Islam's cards on the table and challenging us non-Muslims to wage "spiritual war" with our neighbors.

Lutzer does not scare you with military language or stories of blood and self-imposed martyrdom. For that you will have to look elsewhere. What Lutzer gives us is an insightful look into the Koran and the Islamic tradition that clearly outlines the objectives of all Muslims, both moderate and radical. He quotes frequently and accurately from the Koran. Working from numerous parallels to Scripture and Christianity, he shows that the agenda of Muslims is the overthrow of the West and Christianity, on the grounds that theirs is the only true religion and that ours is idolatry. They have a vision of a global Islamic State governed by Sharia, the law of the Koran. Lutzer points out that "they are careful to disguise their aims such that their work goes unnoticed" (p. 178). He also gives us insight into the ways by which the United Kingdom has allowed Muslims to establish multiple districts where Sharia is the law of the land, superseding the British constitution.

Lutzer is particularly adept at showing the subtle, deceptive strategies of Muslims in provoking us to self-imposed paralysis, primarily because we have emphasized toleration over truth. In our efforts to be tolerant, we remove the cross because they find it "offensive." We become complicit in their agenda when we grant their requests. They use our "separation of church and state" to leverage the adoption of their Islamic state. Lutzer advises against any such compromise, reminding us that this is a "spiritual war." After carefully dissecting other opinions (pp. 203–8), Lutzer gives us practical, concrete strategies for waging the spiritual war in which we will almost certainly have to fight. These are outlined for us in chapter 10, pp. 208–24.

From the days of Mohammed (A.D. 600) to the present, there have been repeated attempts by the followers of "the Prophet" to conquer the world. Lutzer uses the seven churches of Revelation 2–3 to remind us that the church militant is often conquered and overcome. He also illustrates how once-Christian Europe has become a religious wasteland progressively influenced by Islam. He warns us: unless we gird ourselves with the proper armor, we will be next. That is good reason to get the book and read it for all it is worth.