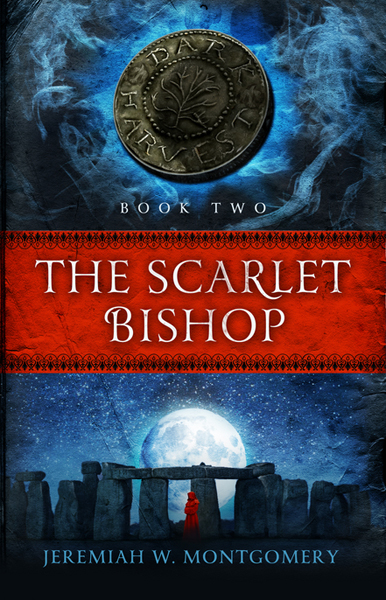 It is difficult for an author to invent a world and make it seem real to the reader. Tolkien and Lewis did it well. But if you also want to add geography and history, it becomes very difficult. But Jeremiah Montgomery has now done it over the course of two books in a projected trilogy. The first book, The Dark Faith, introduced us to an ancient world where a religion something like historic Christianity was being threatened, along with its devotees, by a mystical aberration of that faith. The adherents of the dark faith will do anything to conquer the world with its heresies and gain political power in the bargain. The monk Morumus has set out to translate the sacred writings of his faith into another language, and along the way a heroic apostate from the dark faith has been converted, and she has been helping with the translation.

In this second book, The Scarlet Bishop, a king has been murdered by his own son, and more death is on the horizon. Along the way, it would appear that Morumus himself has been murdered with others. But Montgomery is a crafty author and adept at misleading his readers. He takes you deeper and deeper into this violent and dark story until you are left sitting on the edge of your seat and loving every moment of the book. The last page before the epilogue will leave you gasping for more. The epilogue itself will leave your heart in your throat as you see a new convert face-to-face in danger from her own brother.

It is difficult to write a review of such a book without giving away the secrets that would spoil the mysteries of the story, so I close with some information. Montgomery has given help to the reader as he or she seeks to follow the story. There is a glossary of names and places and also a detailed map in the book. As you read, you will recognize allusions to the Reformed faith, Jesus, and even a thinly veiled ongoing reference to the Roman Catholic Church and any other church that has ever used unscrupulous means to undermine orthodoxy. This is a fun read and comes highly recommended.