The Gospel & Sexual Orientation: A Testimony of the
Reformed Presbyterian Church of North America 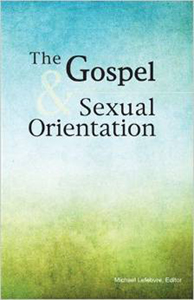 The Gospel & Sexual Orientation: A Testimony of the
Reformed Presbyterian Church of North America

Chapter 1, "Introduction and Terminology," covers the historical development of the new ideas concerning sexuality. This is essential to properly grasping the issues at stake. Chapter 2, "Biology, Gender, and the Biblical Doctrine of Man," emphasizes that a biological link to homosexual orientation does not negate an individual's moral responsibility to avoid what God forbids. Chapter 3, "Personality Traits and the Multiplication of Gender Categories," states: "The church needs to be aware of these trends in our society, multiplying gender categories through the separation of sexuality and brain gender from one's physical gender." Chapter 4, "Hermeneutical Issues of the Homosexuality Debate," deals with the arguments that some use to avoid the clear teaching of the biblical texts and the hermeneutical fallacies behind them. Chapter 5, "Exegesis and Confessional Statements," interacts further with "progressive" scholars' exegesis of the key texts. Larger Catechism Q/A 139 is covered as well. Chapter 6, "Pastoral Implications," deals with many pastoral issues.

This excellent work has a few weaknesses. One, the implications of texts like Romans 1 and 1 Corinthians 6 are not fully mined. In their light, how can genetic make-up be the cause of homosexual desires or any other particular sin? Two, a fuller biblical anthropology, dealing with the implications of genetic research in general, needs to be developed. Three, the presuppositional framework of the social sciences is not challenged sufficiently, though there is a warning of possible bias. Four, the pastoral advice should be better organized. Five, the resource section needs to be edited more carefully and updated. For example, Exodus International no longer exists. Harvest USA should have been listed, as it is both biblically based and Reformed. When biblical and Reformed resources are available, why even go to questionable evangelical resources?