God Dwells among Us: Expanding Eden to the Ends of the Earth 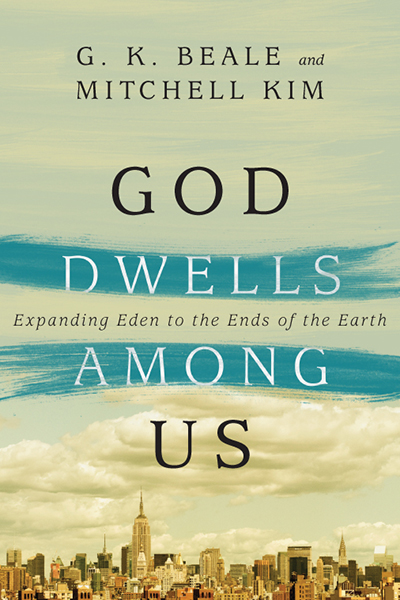 God Dwells among Us: Expanding Eden to the Ends of the Earth

God Dwells among Us is related to a previous work by G. K. Beale, who teaches New Testament at Westminster Theological Seminary: The Temple and the Church's Mission: A Biblical Theology of the Dwelling Place of God (InterVarsity Press, 2004). Mitchell Kim, lead pastor of Living Water Alliance Church in Naperville, Illinois, delivered a seven-week sermon series incorporating the themes of Beale's earlier work. Together they designed this book to share those themes accessibly with a new audience.

The authors desire to impart a biblical-theological sensibility that will motivate the church to “fulfill its mission in the world" (p. 7). This mission flows out of God's plan to bring his chosen people into a holy realm. God reveals this plan progressively in Scripture—through Eden, the temple, God's glorious presence, and the new creation. Students familiar with Beale's writings will feel at home with this book. It is a distillation and at points a collection of verbatim excerpts of its predecessor.

Beale and Kim establish that Eden is itself a temple, which signifies God's presence with his people. This glorious presence progressively unfolds from the garden to the tabernacle and temple and then to the revelation of the Son of God, who “became flesh and dwelt [tabernacled] among us" (John 1:14). God's presence will be consummated at the return of our Savior and the coming of the new heavens and new earth—a perfected, expanded, and even greater Eden-temple. The authors proclaim, “God's purpose and design for his dwelling place from the beginning of creation was to fill the entire heavens and earth" (p. 139). In other words, Revelation 21–22 is a fulfillment of Genesis 1–2.

Therefore, the authors rightly contend that the gospel is not primarily concerned with restoring the original creation. Neither is it merely a promise of subjective well-being. It is God's cosmic plan of glorious consummation. Through the person and work of Jesus Christ, the church receives a blessed communion with the triune God much greater than anything Adam ever experienced. The body of Christ itself is the expanded temple of God.

The authors succeed by conveying this point, even though the book is limited in other respects. While Beale's earlier book developed its themes through successive covenant epochs, the authors admittedly merged them in this book, thus condensing the depth of the original. Readers familiar with the biblical theology of Geerhardus Vos and the contours of redemptive-historical progression may prefer to begin directly with The Temple and the Church's Mission. Nevertheless, God Dwells among Us will prove useful to those unacquainted with the finer points of Reformed biblical theology. Those willing to study its pages will come to a better understanding of God's unfolding plan of dwelling among his people in consummate glory.