A Complete Handbook of Literary Forms in the Bible 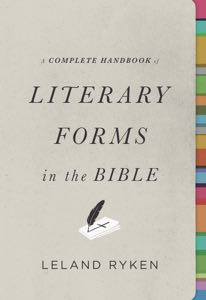 A Complete Handbook of Literary Forms in the Bible

Leland Ryken's latest book begins with "Abundance, Story of" and ends with "Worship Psalm." As advertised, it is a short encyclopedia of literary forms that occur in the Bible, arranged in alphabetical order with brief definitions and descriptions. The half-page entry on "Worship Psalm," for instance, tells us that Jerusalem and the temple, as the actual places for Old Testament worship, feature prominently in worship psalms, along with "snapshots" of the worship experience, exclamations of strong feelings, and a pilgrimage motif. What the description doesn't tell us is how this definition helps us better understand such psalms. And therein lies the difficulty with this book.

The author, a retired professor of literature at Wheaton College, notes that the purpose of knowing literary forms is to "uncover a great deal of the meaning that is in the texts but that remains hidden from view if we do not know about the forms and how they function" (p. 9). I could not agree more. If we understand poetic parallelism, we will not create an exegetical mystery out of the difference between "three" and "four" or "tread" and "stride" when we read that "Three things are stately in their tread; four are stately in their stride" (Prov. 30:29). "Tread" and "stride" are synonyms; "four" is as close a synonym to "three" as you are likely to get. The literary form of Hebrew poetry does not use rhyme as an organizing structure, as we might in an English psalm paraphrase, but rather plays with synonyms and with ways to compare, contrast, and intensify words. To read the Bible well is to read its literary structures well.

But an alphabetical list of literary forms is not the best way to become more attentive to these forms and their significance. It may be fun to know the definition of "epizeuxis," but would you go looking for it? And once you knew the definition, "a word [that] appears twice in succession for the sake of emphasis" (p. 84), would it help you better understand a biblical passage? It would be far better to invest in Ryken's earlier book, The Complete Literary Guide to the Bible, edited with Tremper Longman III, or in his son Philip Ryken's contributions to the Reformed Expository Commentary series. The Complete Literary Guide is uneven in quality and exegetical carefulness, but it does walk readers through each book or section of the Bible, showing how literary structures open our eyes to understand the biblical text. The commentaries are sensitive to the ways in which meaning is conveyed through rhetorical choices. Once your eye has been trained to look for literary structures, you may find the Handbook to be a useful tool to expand your vocabulary and put names to what you now can see.