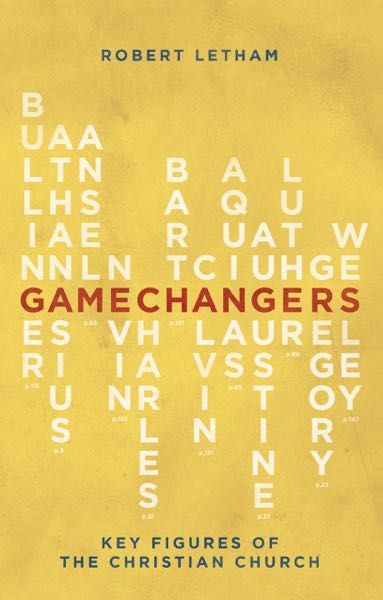 Bob Letham brings a wealth of academic and pastoral experience to bear in this gem of a book. Stemming from a series of occasional lectures that he gave when serving as an Orthodox Presbyterian pastor in Wilmington, Delaware, Letham traverses in a brief span (twelve fairly short but meaty chapters) the whole of church history through a select number of figures that the publishers call “Gamechangers.”

What particularly marked the ancient church—development of the doctrines of God, Christ, and man—is evident in the seminal figures Letham treats. Athanasius (ca. 295–373) defended the doctrine of the full deity of Christ against Arius and all comers, and properly stood “against the world.” Gregory of Nazianzus (ca. 330–391), as one of the three Cappadocian fathers (together with the brothers Basil of Caesarea and Gregory of Nyssa), also defended the full deity of the Spirit and pioneered a way of thinking about God so as to preserve both the unity and the plurality of the Godhead. Augustine (354–430), as the capstone of the patristic period, recaptured the Pauline definition of predestination and grace so as to set the plate for the rest of church history.

Charles the Great (741–814), or Charlemagne, is the only one treated herein who is not a theologian, though he headed a kingdom that would later develop into the Holy Roman Empire. The stagnancy of this period began giving way by the time of Anselm (1033–1109) and Aquinas (1225–1274). The former developed the doctrine of atonement in a way that it had not been previously (the ancient church having focused more on the person of Christ than his work). The latter developed systematic theology as a whole, with an unfortunate sacramentalism in place of a developed pneumatology.

Martin Luther (1483–1546) discovered that the righteousness that God requires is given freely by him as a gift, received by faith alone. This understanding of definitive forgiveness now (not in the future, after being thoroughly sanctified by purgative fires) led to a Reformation that embraced Heinrich Bullinger (1504–1575), John Calvin (1509–1564), and many others. Bullinger showed that, even among the Reformed, the approach was not monolithic, as seen in his doctrine of predestination; Calvin, influenced particularly by Bucer of Strasbourg, developed the doctrine of the work of the Holy Spirit in a way that the church had earlier not done.

John Wesley (1703–1791) focused on the Christian life, though embracing perfectionism. J. W. Nevin (1803–1886) sought to recover the balance of a more churchly approach, although one might argue that while he recovered certain needed elements of the Reformation (e.g., Calvin’s Eucharistic emphasis), he did so in an imbalanced way. Similarly, Karl Barth (1886–1968) sought to oppose the immanentism of liberalism with the transcendence of God that he found in several places, including Calvin (though some would argue that he “gave away the store” in the process).

Letham helpfully provides after his treatment of each thinker a short list of both primary and secondary sources for further reading. Each chapter is relatively brief, addressing the life and times of the “gamechanger,” as well as the substance of his work and the impact of his thought. This would be a fine book for a young adult or an adult Christian education class. Exposure to, and understanding of, church history needs to figure more prominently in the church’s program of Christian education. Letham’s book is an excellent entrée into it.