The Lord’s Supper and the “Popish Mass” 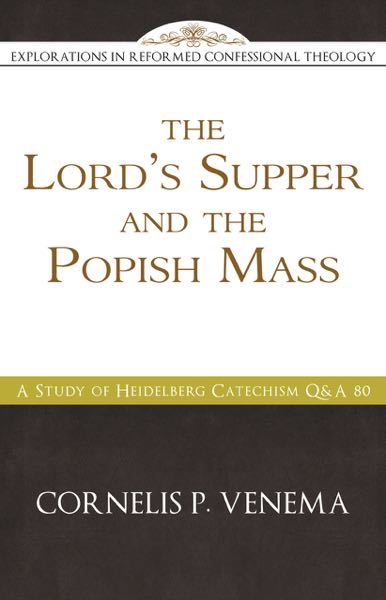 The Lord’s Supper and the “Popish Mass”

In this short but timely book in the Explorations in Reformed Confessional Theology series, Cornelius Venema defends both the strong language and the continuing validity of Question and Answer 80 of the Heidelberg Catechism. This Q&A sets forth the perfection and sufficiency of Christ’s once-for-all sacrifice for sin in strong polemical language by contrasting the biblical observance of the Lord’s Supper, which testifies to that perfect sacrifice, with the “popish mass” of the Roman Catholic Church, which ultimately denigrates and denies that perfect sacrifice, and which the Catechism bluntly condemns as an “accursed idolatry.”

In an age when tolerance and niceness are often extolled as the highest virtues, and when the spirit of ecumenism often pressures church bodies to gloss over genuine theological differences in their interactions with one another, this book by Venema stands as a thoughtful example of a better way forward in genuine, ecumenical dialogue—one that does not ignore real differences in order to achieve a semblance of unity, but which instead confronts those differences respectfully yet honestly.

Recent events within the Reformed world have occasioned the writing of this book, thereby making it highly relevant to ecumenical dialogue between Roman Catholics and Reformed Protestants and to relations among professedly Reformed denominations. For example, in recent decades several Reformed denominations that have historically subscribed to the Heidelberg Catechism have officially relegated Q&A 80 to non-confessional status, including the Reformed Church in America and the Christian Reformed Church in North America (CRCNA). In chapter 4 (entitled “Assessing the Continued Value of Q&A 80”), Venema offers a brief historical overview of the proceedings of the CRCNA and its reasons for deciding to relegate Q&A 80 to non-confessional status.

At the beginning of this book, Venema clearly states his purpose in writing: “My purpose … is to help clarify why the Catechism’s condemnation of the Mass was appropriate in its original setting and remains an important testimony to the truth today” (p. ix). In my opinion, his book achieves its purpose. He offers an overview of the historical occasion, authorship, and purposes of the Heidelberg Catechism, which helps to put the inclusion of Q&A 80 into proper historical context, especially for those unfamiliar with the history of the Catechism. He devotes chapters to assessing both the original and the continued validity of this Q&A. Venema’s well-developed argument climaxes in his final chapter, where he makes a compelling case for the benefits of retaining Q&A 80.

I highly recommend this book for any who are interested in current trends and issues within confessional Reformed thought.