Owen on the Christian Life: Living for the Glory of God in Christ 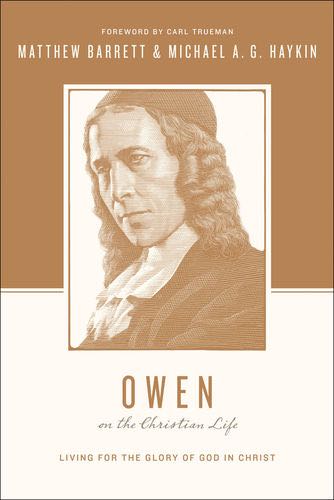 Owen on the Christian Life: Living for the Glory of God in Christ

Owen on the Christian Life: Living for the Glory of God in Christ, by Matthew Barrett and Michael A. G. Haykin. Crossway, 2015. Paperback, 296 pages, list price $21.99. Reviewed by OP minister and professor Ryan M. McGraw.

As a minister, I would love to believe that everyone in the church would read John Owen. There are few men whom the Father has used under the Spirit’s blessing to impart to my soul a greater love for Christ than Owen. I suspect that many ministers pray that the Lord would enable them to digest the best of what they read in order to pass on to their congregations even a tenth of what the Lord has given to them. In this book, Barrett and Haykin invite readers to follow Owen on a guided tour of the Christian life. They do so with skill and simplicity, passing on to their readers part of the blessing that the Lord gave them in studying Owen’s works.

The topics in this book are well chosen. The authors note that it is difficult, if not impossible, to treat every major theme of Owen’s teaching in a single volume. However, they reflect Owen’s greatest legacy to the church by promoting his goal of aiming at the personal holiness of their readers. In contrast to many modern versions of Christian living, the bedrock of Owen’s teaching is the Bible, the Trinity, and the person of Christ (chapters 2–4). This leads to Christ’s glorious work on our behalf (chapter 5), God’s sovereignty in our salvation (chapter 6), and the benefits of redemption that come to both the individual believer and the church (chapters 7–9). The striking way in which Owen weaves the highest Christian doctrines into warmhearted Christian devotion keeps married what many try to divorce in the church today.

The style of this book is simple and accessible. The authors summarize Owen and digest the best of his thought on Christian living. This is not a scholarly work that sets Owen rigorously in his historical context. Such works have their place, and I have profited from them more in the long run than less scholarly works. Yet not all will have this experience. Ideas need to be understood in context, which requires a lot of work and professional skill. Yet ideas also need to be appropriated and translated for the profit of today’s church. The appendix to the book illustrates the value and power of ministers digesting Owen and mediating his thought to their churches. Haykin provides examples from the long-time pastor of his own congregation, as well as several prominent examples from church history. The Lord has used a revival of Owen’s Works to bless the church numerous times in the past, and this reviewer hopes and prays that he will do so again and again.

As with any book on Owen’s theology, this reviewer hopes that reading Owen on the Christian Life will make you want to read Owen himself. Yet this work strikes at the heart of one of the most vital needs of the church today. The church needs to recover a vibrant, scripturally informed, Christ-exalting, Trinitarian view of Christian living. Owen is not the only theologian who ever taught these themes, but he taught them better than most and he speaks prophetically to the needs of the hour. Read this book to use Owen for what God designed him and all other ministers of the gospel to be, namely, instruments of building up the church in unity and maturity to the fullness of the stature of Christ.