People to Be Loved: Why Homosexuality Is Not Just an Issue 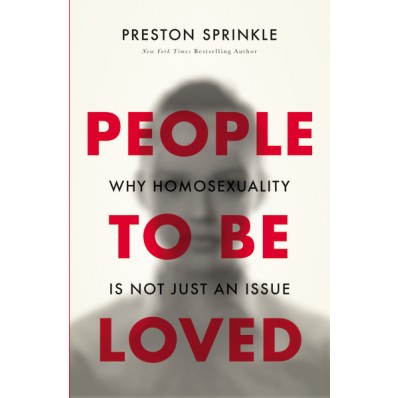 People to Be Loved: Why Homosexuality Is Not Just an Issue

People to Be Loved: Why Homosexuality Is Not Just an Issue, by Preston Sprinkle. Zondervan, 2015. Paperback, 224 pages, list price $16.99. Reviewed by OP minister and seminary professor David VanDrunen.

In this volume, Preston Sprinkle chiefly advances two ideas: that Christians need to do a much better job at befriending, understanding, and loving people with same-sex attraction, and that Scripture considers homosexual conduct a sin.

This book contains a great deal of valuable material. Before discussing it, however, I need to point out a couple of things that detract from the seriousness of Sprinkle’s efforts. First, he engages in repeated self-congratulation early in the volume. He emphasizes how much he loves people, how fair, honest, and open-minded with Scripture he has tried to be, and how he has refused to keep the Bible at arm’s length from real people. It may all be true, but Sprinkle would commend himself better if he let those things shine through in the book implicitly rather than talk about himself explicitly.

Second, Sprinkle lapses into colloquialisms and even crude informalities at frequent intervals. He subjects readers to “yup,” “yeah,” and “Heck.” He refers to “hump[ing] anyone and anything,” making “a big stink,” and being “up the creek.” He mentions the “funky laws” of Leviticus and “girls with big boobs.” I apologize for stating some of these things, but this is what readers will find. Presumably he uses such language because, as he writes, he is not only a pastor and New Testament scholar, but also an “ordinary dude.”

These two drawbacks are unfortunate, since much of the book’s substance is excellent. His exegesis of several key biblical texts is sharp and insightful. The best of these discussions, in my judgment, are his treatments of sexual difference in Genesis 1–2 (chapter 2), Jesus’ teaching on sex and marriage in the Gospels (chapter 5), Romans 1:18–32 (chapter 6), and the two unusual words that Paul uses to refer to homosexual conduct in 1 Corinthians 6:9 and 1 Timothy 1:10 (chapter 7). Sprinkle also offers many helpful comments on celibacy, calling, suffering, and singleness in his final chapter. He calls on the church to “develop a better theology of singleness” in order to deal better with celibate, same-sex attracted people in its midst. I believe he is right. Throughout the book, as indicated above, Sprinkle urges a loving approach toward the same-sex attracted and lambastes much of the Christian world for grievous failings in this area. Of course, readers will have different individual and ecclesiastical experiences with these matters, but his concerns are correct and his exhortations well worth pondering.

Some of Sprinkle’s analysis is unsatisfying. For example, he misses some important aspects of the Sodom story in Genesis 19, and his treatment of “same-sex orientation” is open to several objections. The latter issue, granted, is a very difficult one.

Despite some weaknesses, this is a valuable contribution to contemporary debates about sex and marriage. Reformed Christians would probably do well to bear with the drawbacks and reflect seriously on Sprinkle’s biblical exegesis and exhortations to love.