The Biggest Story: How the Snake Crusher Brings Us Back to the Garden 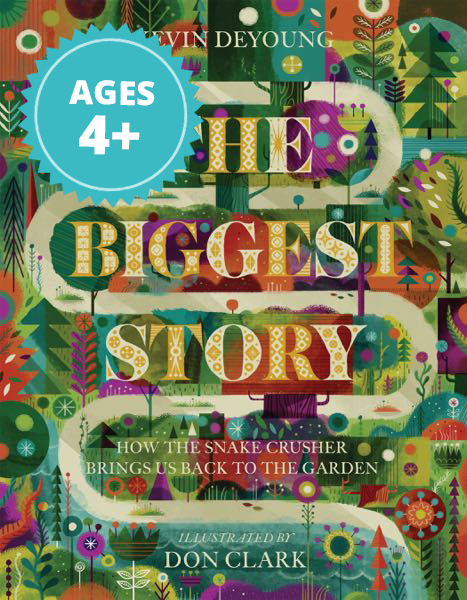 The Biggest Story: How the Snake Crusher Brings Us Back to the Garden

The Biggest Story: How the Snake Crusher Brings Us Back to the Garden, by Kevin DeYoung and illustrated by Don Clark. Crossway, 2015. Hardback, 132 pages, list price $17.99. Reviewed by OP member Emily Van Dixhoorn.

How do familiar Bible stories fit into one big story? Do children need to wait until they can read Berkhof’s Systematic Theology to put the pieces together? Kevin DeYoung answers these questions in his own way in The Biggest Story.

The Biggest Story doesn’t just retell the familiar stories—it magnifies their meaning by highlighting the embedded themes of redemptive history. DeYoung openly states his goals in a “Note to Parents.” He aims not only to present Jesus as our Savior, but also to emphasize “the fulfillment of a long line of prophecies, patterns, and predictions” (128).

DeYoung achieves his goals with flying colors. The Biggest Story reads well, with his “playful and elegant” retelling of the biblical plotline (128). His conversational language reflects an understanding of kids, as well as a reverence for God and his Word. For example, DeYoung explains how Jacob, even though he was the younger brother, received God’s blessing because “God is God, so he gets to pick” (50). DeYoung puts election in terms children can understand, while still sticking to the apostle Paul’s reasoning in Romans 9. DeYoung helps children use biblical knowledge to support other Reformed doctrines, including the covenant, justification, and assurance of salvation.

Without great pictures, most kids won’t read for long. Thankfully, Don Clark’s illustrations match the text in quality and character. The bright colors and abstract shapes resemble Eric Carle’s The Very Hungry Caterpillar. Magenta, orange, turquoise, and lime express drama. The occasional black backdrop conveys the dark setting of particular events, like the burning of the golden calf, the time just before Jesus was born, and Good Friday. Even the ten chapter dividers convey order and system. Each has a big number surrounded by geometric patterns and symbolic imagery that suggest redemptive-historical connections. Reminiscent of Christmas ornaments, the patterns delight the eye, engaging readers young and old, so that the book can be reread with interest, as Bible stories should be.

Thankfully, the book manages to point to Jesus without picturing him. Three partial images (foot, hand, and silhouette) might bother some. Yet, in these illustrations, more remains unsaid than said. Many will be pleased by the deliberate avoidance of using God’s image. Instead, DeYoung uses the images already in the Bible, particularly the garden image, to tell the story of Christ—indeed, to tell what he calls “the best story that has ever been told.” Whether read in one sitting or in ten, The Biggest Story is sure to satisfy both those familiar with the Bible and those hearing it for the first time.