Alphabet of Bible Creatures: Considering God in His Creation 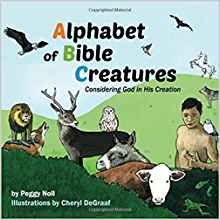 Alphabet of Bible Creatures: Considering God in His Creation

I tested this book out by reading it to two of my grandchildren, aged three and four. Following my short explanation that this was a book about animals that are mentioned in the Bible and that there is one for each letter of the alphabet, the two were thrilled page after page. They tried to name the animal, made the first sound in that animal’s name, then traced the letter with their fingers.

Each double-page spread consists of a simple yet colorful and captivating illustration. DeGraaf’s art incorporates the featured capital letter and its animal in a scene that fits well with the biblical concept conveyed in Noll’s short rhyming poems. Each poem is well crafted from, and substantiated by, several Bible verses, which are also written out. The opposing page is neatly arrayed with nine of the same capital letter pictured with its animal. My granddaughters loved spotting the animal from the right page that was used in the array on the left.

Noll’s poems are rich with deep theological truth stated in a child-friendly way that is fun to read and listen to as well as reverent, which I find rare in today’s world of trite Christian children’s media. She demonstrates how Scripture uses animals as metaphors to show the characteristics of God, the plight of man, and what God in his rich mercy has done for his people. God is our refuge and strength as the rocks are for the rock badger. The psalmist is like a desert owl in the wilderness. Our heavenly Father loves us more than the sparrows, each of whom he knows and sees.

I was surprised to see “U” is for unicorn, but the King James version of Job 39:9 asks, “Will the unicorn be willing to serve thee?” Noll handles it well in her poem:

It may have been a unicorn

That God revealed to Job

To show His servant who was boss

Of all who walk the globe.

This is a delightful and valuable book for regular teaching of Bible truths and Scripture memory. As a teacher I have one critique. The alphabet should feature the lowercase letters more; children learn to read more readily when taught lowercase letters first.