Christ and the Law: Antinomianism at the Westminster Assembly 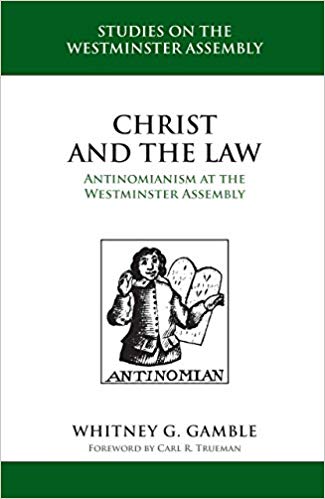 Christ and the Law: Antinomianism at the Westminster Assembly

In her introduction Gamble asserts that “English antinomianism ... was more complex and multifaceted than the simple denial of the continued use of and obligation to follow the moral law” (1). In fact, there were a host of related issues seated within a Reformed community fiercely battling a growing Arminianism in the English church.

The first chapter explains that, in the period leading up to the Westminster Assembly, three groups “vied for the hearts and minds of the English people: Arminians, the Reformed, and antinomians” (11). Chapter two traces how the Westminster Assembly responded to certain critical theological matters including: the revision of article seven in the Thirty-Nine Articles on the Law of the Old Testament, the covenant structure of biblical redemption (the relationship of Old and New Testaments in particular), the role of faith in salvation, the relationship between justification and sanctification, and the question of whether God punished sin in his children.

The third chapter asks whether antinomianism was simply misguided or heretical, raising a host of questions around the role of the civil magistrate in responding to errors in the church. Chapter four traces critical debates within the assembly itself over several dimensions of Christology. For instance, there was a lengthy and heated debate over whether both the active (keeping the moral law perfectly) and passive (receiving the full penalty for sin) obedience of Christ were imputed to the believer for justification.

Chapter five takes up a series of related questions surrounding the nature of saving faith, repentance, and the fruit of good works. What role does faith play in justification? Is faith a “work”? Does repentance follow faith or is it a preparation for faith? Does faith “automatically” produce good works?

The book’s final chapter walks through chapter 11 of the Westminster Confession of Faith, “On Justification,” carefully examining how the divines were responding to antinomianism at every step in their work.

I commend this work for three reasons. First, it is a fine piece of historical scholarship, employing vivid historical details that make for interesting and engaging reading. Second, this is a work that breaks new ground in understanding the context and influences upon the development of the Westminster Standards. Most students of the Westminster Confession are aware that the divines crafted many of their statements with Roman Catholic teaching in view. Here we see that there were forces within the Reformed community that were equally if not more formative upon their labors. Third, for pastors and teachers, Christ and the Law is a helpful resource for understanding perennial issues in the life of the church. Antinomianism and the related spiritual errors are still with us.

Here is a resource that will help to diagnose and therefore treat similar spiritual maladies today.