The Battle for the Biblical Family 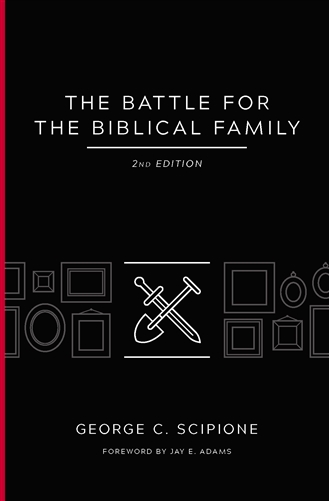 The Battle for the Biblical Family

If I profess, with the loudest voice and the clearest exposition, every portion of the truth of God except precisely that little point which the world and the devil are at that moment attacking, I am not confessing Christ, however boldly I may be professing Christianity. Where the battle rages the loyalty of the soldier is proved; and to be steady on all the battle-field besides is mere flight and disgrace to him if he flinches at that one point.

This famous quote (which is often attributed to Martin Luther but rightly belongs to Elizabeth Rundle Charles) states precisely why Dr. Scipione’s book is a must-read for all church officers, marriage counselors, and anyone who is married or who plans on being married. The forces that have allied themselves to actively dismantle the biblical family have, of late, been largely successful in their warfare, perhaps because many in the church are soldiers asleep at their post. Scipione arms his reader with concrete, well illustrated, and biblically sound stratagems to aid the church militant in the grand battle that she presently faces in protecting the biblical family.

Scipione works through a variety of family-related issues much like a gemologist who inspects the various facets of a diamond. Each chapter addresses an aspect of the family and how attacks have been leveled against it from psychology, atheistic ideologies, humanism, and even the Girl Scouts. Starting with a defense of the family as a basic building block to a healthy society, Scipione takes his reader from that foundation through to contemporary issues such as transgenderism. Scipione utilizes a rich complement of systematic, historical redemptive, and exemplary approaches to develop his various topics of discussion.

The weakness of this book might be the fact that some will desire a fuller treatment of a few of the topics. This Scipione admits in the book (see especially his remarks with respect to the civil magistrate as it relates to the family). However, I trust the vast majority of readers will find sufficient material to digest and to aid them in their particular fight.

Three strengths make this book worthy of note. First, Scipione does not simply identify the battle for the biblical family that closely concerns many Christians, but offers concrete biblical solutions for getting the victory. Second, the enemies exposed in this book are forces both outside the family as well as inside the family. Third, the book includes a number of very edifying appendixes that address some presently debated subjects (gender roles, counseling, and the civil magistrate, to name a few).

This book is the expansion of a previous work titled The Sword and the Shovel (2002), which was itself a revision of a work titled The Biblical Battle for the Family (1996). Those who have read either of those books will find sufficient additions in this present work to justify its purchase.