Hope in Times of Fear: The Resurrection and the Meaning of Easter 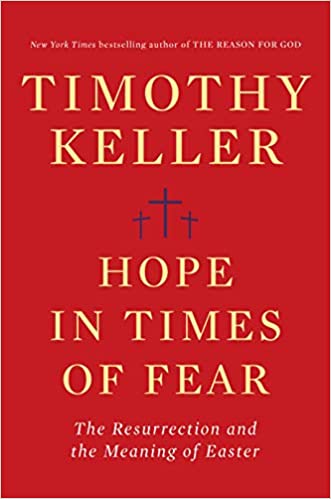 Hope in Times of Fear: The Resurrection and the Meaning of Easter

Hope in Times of Fear: The Resurrection and the Meaning of Easter, by Timothy Keller. Viking, 2021. Hardcover, 272 pages, $21.02 (Amazon). Reviewed by OP pastor Jeremiah W. Montgomery.

Reading The Reason for God in 2008, I was struck by Tim Keller’s emphasis on the centrality of the resurrection. If Jesus rose from the dead, then everything he said matters—including the things that modern people find most offensive. But if Jesus was not raised, nothing he said matters. The point was simple: settle the big question first.

More than a decade later, Keller has returned to the centrality of the resurrection with Hope in Times of Fear. In this volume, his focus is not as philosophical. As he writes in the preface, “I am concentrating on the resurrection as a key to understanding the whole Bible and to facing all the challenges of life” (xiv).

Over the course of twelve chapters, Keller cites numerous theologians beloved within the Reformed tradition, including G. K. Beale, John Murray, Michael Horton, John Owen, Herman Ridderbos, and Geerhardus Vos. Given Keller’s broad readership, it is quite possible that his interaction with these authors may draw many new readers to their works!

In the first chapter, Keller reviews the evidence for the historicity of the resurrection. Yet as he unfolds the facts, he also emphasizes that no soul approaches them without biases: “When we confront the claim of the resurrection, we address it not only with logic but with a lifetime of hopes and fears and preexisting faith commitments. And we will never be able to accept it until we see our need for God’s grace” (15).

Keller next explores how the resurrection of Christ changes everyday life. “When Jesus rose, he brought the future kingdom of God into the present. It is not yet here fully but it is here substantially” (24). This “already-but-not-yet” reality cautions us against unrealistic optimism or unwarranted pessimism (28–29), while at the same time affirming the prospect for real change: “When we unite with the risen Christ by faith, that future power that is potent enough to remake the universe comes into us . . . To be brought out of one kingdom into another . . . means to be freed from things that once controlled us” (31–32).

Several chapters (ch. 6–8) deal with how the resurrection of Jesus brought hope into the lives of individuals in the New Testament—and how that same hope can now enter our lives. Subsequent chapters (ch. 9–11) suggest how the resurrection and its implications address contemporary issues of race, injustice, sexuality, and suffering. Though the issues are thorny, Keller’s analysis provides biblical wisdom that avoids the double trap of either conservative reactionism or liberal reductionism. Particularly commendable is the discussion of poverty and injustice, in which Keller demonstrates that the Bible “gives full weight both to personal responsibility and social structures,” while acknowledging the deep sin that permeates all hearts (160–168).

The final chapter and epilogue demonstrate that the resurrection alone can lead us to “the world and life that we have always longed for but never had” (208). Writing during the COVID-19 pandemic and amidst a personal struggle with pancreatic cancer, Keller confesses that “writing in such dark times helped me see in the resurrection new depths of comfort and power” (217). May Hope in Times of Fear do the same for all who read it.