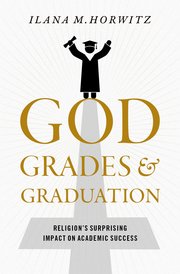 In this book, Dr. Horwitz presents the results of her extensive research into the role of religion in academic success. Her research, recently highlighted in the Wall Street Journal (Jan. 25), is important because it challenges the sociological consensus in the academy “that religion does not have any explanatory power once social class is accounted for” (15). She challenges this consensus by looking at religion as a variable within each socioeconomic category.

An agnostic Jew, she came to her research topic after discovering “that many of my neighbors organized much of their lives around their Christian commitments” (xii). Within the academy, her research garnered two very different reactions, one from academics who had grown up in very liberal and secular environments who were “unaware of how religious Americans really are” and the other from Christians within the academy who affirmed her findings but only quietly, lest they be seen as too religious (xii). Horwitz writes with both groups in mind, as well as Christian parents and leaders of Christian schools and other institutions.

Horwitz’s research focuses on high-school-age “abiders.” These Christian students “emphasize the role of faith in their daily lives, feel close to God, attend religious services at least weekly, pray by themselves on a regular basis, and look to God and scripture for guidance” (10). They live to please God, “which affects how they perceive themselves, how they carry themselves, and how they imagine their future” (21). Importantly, “abiders” don’t simply do these things because their parents make them; rather, they have internalized their commitment to the faith.

Her main conclusions are (75):

• Abiders across all racial group fare better than nonabiders.

When it comes to college, abiders complete more years of education, but at less selective schools than one would expect based on their grades. This is mainly because professional class abiders “undermatch” for college compared with professional class nonabiders. In other words, professional class abiders are less likely to even consider, let alone pursue, Ivy League or similarly selective college options because their God-centered self-concept leads them to prioritize things other than having a prestigious career—like being near home and church, finding a Christian spouse and friends, avoiding temptation, and seeking opportunities for Christian service.

In her concluding remarks, Horwitz encourages selective colleges “to consider what they can do to attract these highly religious applicants, many of whom are excellent students” (176) and “to view religious and ideological diversity as valuable when admitting applicants” (176). This diversity goal, argues Horwitz, should target “not merely students from different religions but abiders who are religious” (177).

Horwitz sees the fact that religious Americans eschew selective colleges as a problem, not only for those colleges, and for those students, but for America. Horwitz recognizes that her secular colleagues think that the views of abiders are contrary to social progress, since they place limits on people’s autonomy and endorse traditional gender roles. But Horwitz argues that this is all the more reason that colleges should be “gathering points where civil comity is learned” (177), thus encouraging peaceful democratic process.

As a Christian school board trustee, I’m also interested in what Horwitz’s conclusions mean for Christian schooling. Her research suggests that the “religious restraint” (27), “godly guardrails” (88), and “network closure” (91) that students experience at Christian schools lead to academic success across racial categories, particularly for working class and middle-class students. This is encouraging news for Christian schools and for our communities.